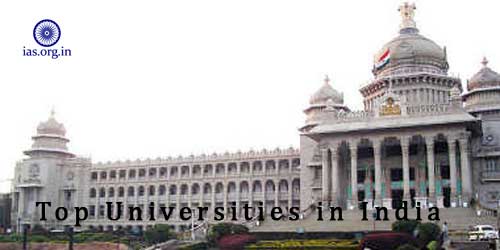 Indian Institute of Science (IISc) , a public university for scientific research and higher education, is located in Bangalore, India. Established in 1909 with active support from Jamsetji Tata and H.H. Sir Krishnaraja Wodeyar IV, the Maharaja of Mysore, it is also locally known as the “Tata Institute”. It acquired the status of a Deemed University in 1958. IISc is widely regarded as India’s finest institution in science. The foundation stone was laid in 1911, and the first batch of students started their studies in the same year.

The Institute was the first to introduce masters programmes in engineering. It has also started integrated Ph.D. programmes in Biological, Chemical, Physical and Mathematical Sciences for science graduates.

Degrees offered by the institute may be broadly classified into two categories:

Admission into IISc is highly competitive. Usually, only the top 0.01 percent candidates qualifying the GATE examination are able to clear the cutoff for ME/M.Tech admissions.

Candidates are called for interviews based on the entrance test of the Institute or GATE or any other test recognised by the Institute.

Must Read: Oldest Universities in the World

Jawaharlal Nehru University (JNU ) is a public central university in New Delhi, the capital of India. In 2012 The National Assessment and Accreditation Council gave the university a grade of 3.9 out of 4, the highest grade awarded to any educational institution in the country. It is one of the top universities in the country, ranking third according to the National Institutional Ranking Framework. It is known for intense student activism and providing a liberal democratic space for students in India.

Jawaharlal Nehru University was established in 1969 by an act of parliament. It was named after Jawaharlal Nehru, India’s first Prime Minister. G. Parthsarthi was the first vice-chancellor.

“The University shall endeavour to promote the principles for which Jawaharlal Nehru worked during his life-time which included national integration, social justice, secularism, democratic way of life, international understanding and scientific approach to the problems of society.

Degrees offered by the institute may be broadly classified into two categories:

The Entrance Examination for admission to various programmes of study is held all over India in the third week of May every year on the dates determined each year by the Standing Committee on Admissions and subject to availability of Kendriya Vidyalayas. One question paper of three hours duration is set for the each programme of study or each set of programmes of study. The Entrance Examination is held for four days with two three-hour sessions on each day. This enables the University to have a far wider regional reach giving opportunity to a far larger number of candidates to seek admission in JNU. The University always reserves the right to change/cancel any Centre of Examination without assigning any reason. Any additions or deletions in the list of Centres of Examination are discussed in the meeting of the Standing Committee on Admissions and then placed before the competent
authority for approval.

Banaras Hindu University is a public central university located in Varanasi, Uttar Pradesh. BHU is one of the largest residential universities in Asia, with over 20,000 students. The university comprises all castes, creeds, religions and genders, and is on the list of Institutes of National Importance. This Creative and innovative university was founded by the great nationalist leader, Pandit Madan Mohan Malviya, in 1916 with cooperation of great personalities like Dr Annie Besant, who viewed it as the University of India. Banaras Hindu University was created under the Parliamentary legislation – B.H.U. Act 1915.

Banaras Hindu University conducts national level undergraduate (UET) and postgraduate (PET) entrance tests usually during May–June for admission. Admissions are done according to merit in the entrance tests, subject to fulfilling of other eligibility requirements.

Birla Institute of Technology & Science is an Indian institute of higher education and a deemed university under Section 3 of the UGC Act 1956. The university focuses primarily on undergraduate education in engineering and the sciences and on its management programme. It is widely known as the best private engineering institute and stands among the top Engineering and B-schools of India.

The institute was established in its present form in 1964. During this period, the institute’s transformation from a regional engineering college to a national university was backed by G.D. Birla. BITS has established centres at Pilani, Goa, Hyderabad and Dubai.

The Birla Education Trust was founded in 1929; the intermediate college became a degree college and later offered postgraduate courses. The masters programme in electronics began in 1955.

BITS Pilani offers master’s degrees in engineering, pharmacy, public health and business administration. The Department of Management at BITS Pilani was established in 1971. Its objective is to improve management for engineers seeking to work in the emerging industrial world. BITS-Pilani has also started a 3-year Integrated Master of Engineering program in Computer Science with specialization in Information Security in their Hyderabad campus. This program targets Bachelor of Science students who have majored in Physics, Mathematics or both.

Admission to BITS is based on student performance on the all-India Entrance Examination, the BITS Admission Test (BITSAT). The test, for which applications are submitted in December, is conducted online in May and June in cities all over India. The exam tests the candidate’s knowledge, reasoning and analytical abilities in English, physics, chemistry, mathematics and logical reasoning, and is based on higher secondary curricula in India and abroad. To be eligible for admission, students are required to obtain a minimum average grade of 75 percent in physics, chemistry and mathematics in their higher secondary examination.

As part of Nehru’s dream for a free self-sufficient India, the institute was established to train scientists and engineers after India attained independence in 1947. It shares its organisational structure and undergraduate admission process with sister IITs. The students and alumni of IIT Kharagpur are informally referred to as KGPians. Among all IITs, IIT Kharagpur has the largest campus (2,100 acres), the most departments, and the highest student enrollment. IIT Kharagpur is known for its festivals: Spring Fest (Social and Cultural Festival) and Kshitij (Asia’s largest Techno-Management Festival).

Here in the place of that Hijli Detention Camp stands the fine monument of India, representing India’s urges, India’s future in the making. This picture seems to me symbolical of the changes that are coming to India.

The institute offers the Continuing Education Programme (CEP) for qualified engineers and scientists to learn technologies and developments in their academic disciplines.

Admission to most undergraduate and postgraduate courses in IIT Kharagpur is granted through written entrance examinations. Admissions to M.S.(by Research) and PhD programmes are based on written tests followed by personal interviews.

Admission to undergraduate programmes in all IITs is tied to the Indian Institute of Technology Joint Entrance Examination (IIT-JEE). The admissions to postgraduate programmes (MTech) are made primarily through the Graduate Aptitude Test in Engineering (GATE). Other postgraduate entrance exams include Joint Admission to MSc (JAM) for MSc, and Common Admission Test (CAT) conducted by IIMs for management studies.

Aligarh Muslim University (AMU) is a public university funded by the Government of India. It was originally established by Sir Syed Ahmad Khan as Mohammedan Anglo-Oriental College in 1875. The Mohammedan Anglo-Oriental College became Aligarh Muslim University in 1920. The main campus of AMU is located in the city of Aligarh. AMU offers more than 300 courses in both traditional and modern branches of education. The university comprises all castes, creeds, religions and genders, and is a Institute of National Importance provided under Seventh Schedule of the Constitution at its commencement. It was established as Madrasatul Uloom Musalmanan-e-Hind in 1875. The college started on 24 May 1875.

Eligibility Criteria for Admission in AMU

The eligibility criterion for all the courses is different. You must have at least 50% marks in aggregate to apply.