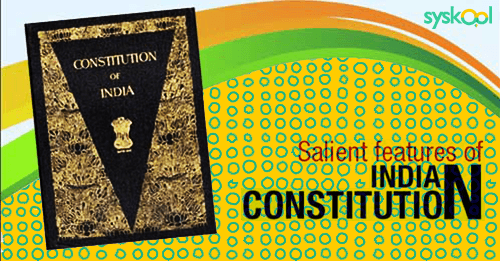 Following are 20 most important Features of Indian Constitution that every Indian must know.

1. The Bulkiest Constitution of the World

The Indian Constitution is one of the bulkiest constitutions of the world. The constitution, originally consisting of 395 articles and eight schedules now consist of 444 articles divided into 22 parts and 12 schedules.

2. Combination of Rigidity and Flexibility

4. Federal System with a Unitary Bias

The Indian Constitution provides for a federation with a strong center. It is noteworthy that the Constitution has not used the word ‘federation’, anywhere, and has described India as a ‘Union of State’, which implies that the Indian federation is not the result of any agreement among the units and the units cannot secede from it. India possesses most of the federal features but also several unitary features. The federal character acquires unitary character during an emergency when the normal distribution of powers between the center and the states undergoes vital changes.

The Constitution also contains a list of 11 fundamental duties of the citizens. While ten of these duties were added to the Constitution by the forty-second amendment in 1976, the eleventh duty was added by the 86th Constitutional Amendment Act 2002. These duties serve as constant reminders to the citizens that they have to observe certain basic norms of democratic conduct.

The Constitution makes India a secular state. This means that there is no state religion and the state is completely detached from religious dogmas. It also implies that citizens are free to profess, practice and propagate any religion. However, freedom of religion is not absolute and same can be regulated in the interest of the public.

The Constitution provides an independent judiciary which ensures that the government is carried on in accordance with the provisions of the Constitution. It acts as the guardian of the liberties and fundamental rights of the citizen. It also determines the limit of the power of the centre and the states.

10. People as Source of Authority

The Constitution draws its authority from the people and has been promulgated in the name of people. This is evident from the preamble which states ‘We the people of India … do thereby adopt, enact and give ourselves this Constitution’.

The Constitution introduces universal adult franchise and accord the right to vote to all citizens above 18 years of age without discrimination. However, it makes the reservation of seats for Scheduled Caste and Scheduled Tribes to provide them adequate representation.

The Constitution vests extraordinary powers in the President during emergencies arising out of armed rebellion or external aggression; emergency due to the breakdown of constitutional machinery in the state; and financial emergency when the credit of the country is threatened. In fact, during an emergency, the federal Constitution can virtually be converted into a unitary Constitution.

It provides single citizenship. All persons residing in different parts of the country are treated as Indian citizens and are entitled to the same rights of citizenship. There is no separate citizenship of different states.

The constitution makes special provision for minorities, Scheduled Castes, Scheduled Tribes, etc. It can not only reserve seats for them in the Parliament and the state legislature but also grants them certain special rights and privileges.

The Constitution provides the constitutional basis to Panchayati Raj institutions as well as urban local bodies. This was achieved through the seventy-third and seventy-fourth amendments to the Constitution carried out in December 1992.

The concept of ‘rule of law’ was borrowed from Britain. It implies that no man is above the law and all individuals are subject to the jurisdiction of the ordinary courts. There are basically three postulates of the Rule of Law.

The Constitution provides a single integrated judiciary with the Supreme Court at the top. Below the Supreme Court here is high Courts at the State level. Under the High Court, there are subordinate courts. This system of single courts enforces both the central and state laws. This system is at complete variance with the United States where federal laws are enforced by the Federal Courts, while the state laws are enforced by the state courts.

Apart from the three traditional organs of government viz. Legislature, Executive, and Judiciary, the Indian Constitution provides for certain bodies certain bodies which work as bulwarks of the democratic system. These include
(i) The Election Commission which ensures free and fair election to Parliament, the state legislature and for the posts of President and Vice-President.
(ii) Comptroller and Auditor General of India which audits the accounts of central and state governments and acts as the guardian of public money.
(iii) Public Service Commission both at the centre and state level. They conduct examinations for recruitment of They conduct examinations for recruitment of civil services at the centre and state. They also advise President and Governor on disciplinary matters. The Constitution has sought to ensure the independence of the above bodies by assuring the above officials the security of tenure; and by charging their expenses on the Consolidated Fund of India and the state.