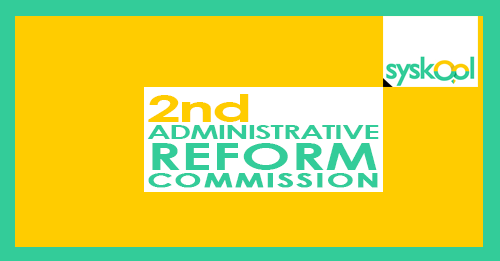 Sensing the need for immediate and comprehensive evaluation of the administrative system, the Government of India appointed the second Administrative Reforms Commission on 31 August 2005, under the chairmanship of S. Veerappa Moily, member of Congress working committee and former Chief Minister of Karnataka. The Commission gave three reports in June 2006, July 2006 and September 2006. The fourth report released on 12 February 2007. ‘Ethics in Governance’, has been the latest, recommending greater transparency, accountability and ethical behavior in politics, judiciary, and administration.

Corruption is an important manifestation of the failure of ethics. Consequently, the commission also suggested measures for reducing or eliminating corruption. An empowered committee had already been set up to examine the recommendations of the commission and give its report.

The Commission was supposed to –

Suggest measures to achieve a proactive, responsive, accountable, sustainable and efficient administration for the country at all levels of the government. submit its report to the government within one year. broadly give recommendations on the following –

Second SRC was appointed after a gap of 44 years after the First Administrative Reforms Commission, which was appointed during the time of Prime Minister Jawahar Lal Nehru in 1964.