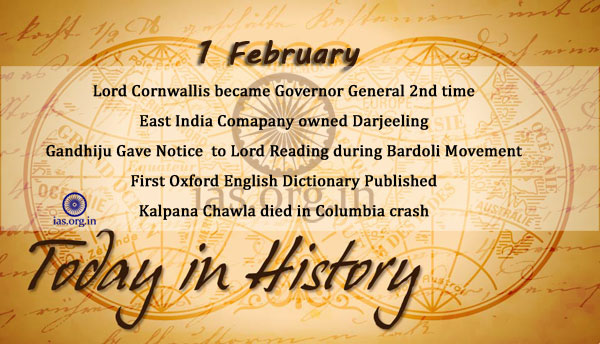 Lord Cornwallis was sworn in as Governor General of India for a second time in England. However, he did not proceed to India till 1805.

On this day in 1884, the first portion, or fascicle, of the Oxford English Dictionary (OED), considered the most comprehensive and accurate dictionary of the English language, is published.

Amrit Kaur, an eminent social worker, freedom fighter and political leader, was born a princess in the royal family of King Harman Singh of Kapoorthala. She assisted Gandhi for 18 years and was connected with World Health Organisation and Red Cross Society.

Gandhiji gives notice to the Viceroy Lord Reading during Bardoli movement to inform him that he was intensifying his action and non-cooperation was to be escalated to Civil Disobedience.