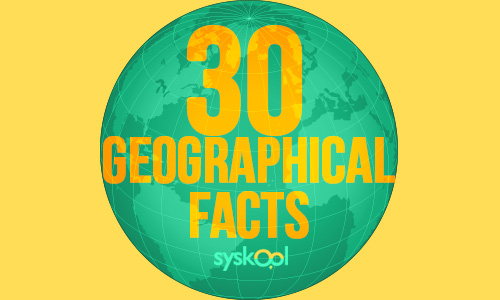 The wettest inhabited place in the world is Lloro in Columbia with the highest total annual rainfall of 13299.4 mm followed by Mawsynram in India of 11872 mm.

The largest meteorite crater is located in Vredefort in South Africa. It has a diameter of 300 km followed by Sudbury in Ontario, Canada with a diameter of 250 km.

Largest Island in a Lake on an Island

The largest island in a lake on an island measuring 630 square kilometers is Samosir or Pulao Samosir. It is an uninhabited volcanic Island in Lake Toba on Sumatra, Indonesia.

Largest Island on an Island

The largest island on an island is an unnamed outcrop on Victoria Island, Canada with an area of 0.016 square km.

The world’s largest river, which is also the second longest river with the length of 6,400 km, is the Amazon River. It traverses the South American countries of Bolivia, Brazil, Columbia, Ecuador, Peru, and Venezuela. It has an average discharge of 2,19,000 cubic meters per second at its mouth.

You may also like Indian Geography Quiz (Practice Paper)

The world’s largest lake is the Caspian Sea which is shared by Azerbaijan, Kazakhstan, Iran, Russia, and Turkmenistan. It has an area of 3,71,000 square km followed by Lake Michigan / Huron of Canada and USA with an area of 1,17,436 square kilometers.

The longest mountain range in the world is the Andes mountains in South America with a total length of 7242 KM followed by Rocky mountains in North America which is 6035 km long.

The longest river, which traverses the North African countries of Burundi, Congo, Egypt, Ethiopia, Kenya, Rwanda, Sudan, Tanzania, and Uganda, is the Nile river. It has a total length of 6650 km.

The smallest sea in the world is the Gulf of California which has an area of 1,53,070 square km followed by the Persian Gulf with an area of 2,30,000 square kilometers.

The deepest cave in the world is Krubera cave in Georgia. It has a depth of 2191 meters followed by Sniezhnaja Mezhonnogo also in Georgia with a depth of 1753 meters.

The deepest Deep-Sea Trench is the Marianas Trench with the deepest point of 10911 meters. Tonga trench is second with the depth of 10882 meters.

The deepest lake in the world is Lake Baikal in Russia with its greatest depth at 1781 meters followed by Lake Tanganyika 1471 meters, which is shared by Burundi Tanzania Congo and Zambia.

The highest Tides, with an average height of 14.7 meters are on Burncoat Head in Nova Scottish, Canada followed by La Rance Estuary in France with an average of 13.5 meters.

The highest waterfall in the world is Angel Falls in Venezuela with a towering height of 979 meters followed by Tugela Falls in South Africa with a height of 948 meters.

The highest navigable lake in the world is Lake Titicaca located on the border of Bolivia in Peru. This lake which is the largest in South America, side 3812 m above the sea level.