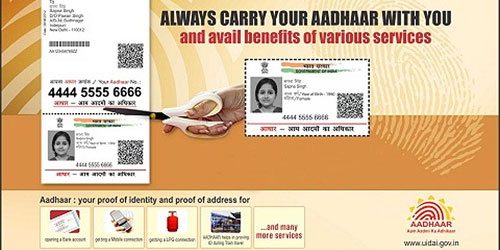 On 16, March Lok Sabha, while rejecting the five amendments suggested by the opposition members of the Rajya Sabha, passed the Aadhaar (Targeted Delivery of Financial and other subsidies, Benefits and Services) bill, 2016 through a voice vote in its original form.

Since the Government had introduced the Bill as a money Bill, it could not be rejected or amended by the Rajya Sabha. Although the Upper House, the Rajya Sabha, can only recommend for amendments, the Lok Sabha has got the power to decide not to return money Bill within 14 days after receiving it from Lok Sabha, family which the bill is considered passed by the Upper House (Article 109 of the Constitution of India).

The amendments suggested a provision to permit a person to “opt out” of the Aadhaar system even if she or he is already enrolled; and another provision to ensure that if a person decides not to be part of the Aadhar system, she/he will be catered “alternate and viable” means of identification for purposes of Government subsidy, benefit or service.

Must Read:  Aadhar Bill Presented in the Lok Sabha

Another amendment demanded to restrict the use of Aadhaar numbers only for targeting of Government benefits or services and not for any other purpose.

Another of the amendments solicited to change the phrase “national security” to “public emergency or in the interest of public safety” in the provision defining situations in which disclosure of identity information of an individual to certain law enforcement agencies can be permitted. According to the author of the suggested amendments the tern “national security” was a “loose” term likely to be misused while interpreting it.

Main Features of the Bill

The Bill has incorporated, in the context of Data Security, the provision to guarantee the security, confidentiality of sensitive information.

The Bill upholds privacy rights, in the context of individual right, of citizens as data access shall be limited to high level functionaries and makes data sharing rule based.

Eligibility for getting an Aadhaar number

Every Indian resident is able to acquire an Aadhaar number. Under the Bill a ‘resident’ is defined as a person who has resided in India continuously for 182 days, in the one year preceding the data of application for enrolment for Aadhaar.

Information to be submitted

To get an Aadhaar number an individual has to submit her/his (i) biometric (photograph, finger print, iris scan) and (ii) demographic (name, date of birth, address) information. The Unique Identification Authority (UID) may specify other biometric and demographic information.

Use of Aadhaar Number

In order to verify the identity of a person seeking a subsidy or a service, the government requires him or her to have an Aadhaar number. If the person does not possess an Aadhaar number, he or she would be directed by the Government to apply for the same, and in the meantime, the Government has to provide an alternative means of identification to such person. Any public or private entity can accept the number the Number as a proof of identity of the holder of the Number, for any purpose. But Aadhar number cannot be a proof of citizenship or domicile.