My account
Get into your account.
LoginRegister
Plans
Home Learn Polity The President’s Power to Pass Ordinance 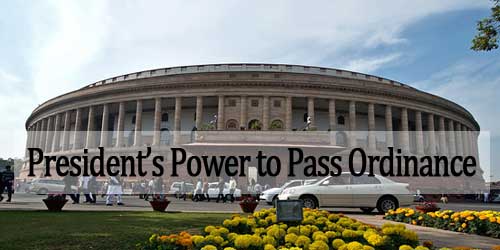 According to this executive order, the students belonging to State Governments boards will not have to sit for NEET on July 24, 2016. However, they are going to be part of this uniform entrance exam from the next academic session.

All these events led to a central theme: the theme of issuance of ordinances and its validity in the context of India democracy.

Must Read: Powers of The President of India

Giving definition of an Ordinance, A Dictionary of Law by William C Anderson says, ‘Ordinance, is a State paper, operative as a fundamental law, yet not described as either a Constitution or a Statute.’

Simply put, Ordinances are executive orders, signed by the President of India, that command the same force and effect an Act passed by the Parliament does have.

Article 123 of the Constitution of India grants the power to issue ordinances to the President of India.

However, the reality behind issuing and passage of  ordinances is that it is the Union Cabinet that, finally, gives green signal for issuing ordinances to the President who has to merely give his assent.

On the Need for Ordinance

An ordinance, ordinarily considered as a last recourse and not an instrument to sideline the power or functioning of Parliament, can be issued only when both houses of Parliament Lok Sabha and Rajya Sabha are not in session.

It has been presumed that generally ordinances should be issued only on issues which need immediate consideration and cannot wait for Parliament to assemble and consider the bill.

However, when we shift from theory to practical in the context of making of an ordinance we are made to comprehend that, in reality, many times ordinances are issued by Governments due to the lack of consensus, on the issue in focus, in the Parliament.

It is important to mention here that if one goes through the history of passage of ordinances in India one will find that on an average, 10.3 ordinances have been issued every year even though these are to used as an emergency provision only.

Dealing with the promulgation of an Ordinance sub-clause (a) of clause 2 of the Article 123 of the Constitution of India says: An Ordinance promulgated under this article shall have the same force and effect as an Act of Parliament, but every such Ordinance “shall be laid before both Houses of Parliament and shall cease to operate at the expiration of six weeks from the reassembly of Parliament, or, if before the expiration of that period resolutions disapproving it are passed by both Houses, upon the passing of the second of those resolutions”.

Sub-clause (6) of clause 2 of the Article 123, however says that an ordinance ‘may be withdrawn at any time by the President’.

During the Validity period, that is of six weeks, of an ordinance, Parliament can either pass the ordinance transforming it into an Act of disapprove the ordinance. If the Parliament fails to pass it, the ordinance can be re-issued by the Government (Constitutionally the President).

The Constitution of India does not put any time limit as there is no limit how many times ordinances can be re-issued. However, the Supreme Court, in the context of the re-issuance of the ordinances, has ruled that an ordinance cannot be re-issued endlessly without getting it to vote in the legislature.