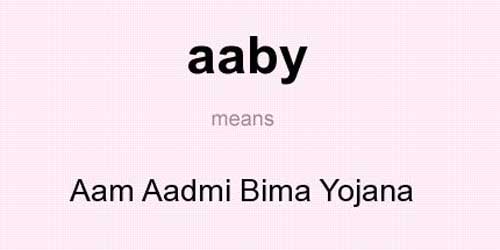 Ministry of Finance, Government of India has approved the merger of Social Security Schemes viz., Aam Admi Bima Yojana (AABY) and Janashree Bima Yojana (JBY).
The merged scheme is renamed Aam Admi Bima Yojana and has come into effect from 01.01.2013.
DETAILS OF THE SCHEME:
Eligibility criteria:
i)The members should be aged between 18 years completed and 59 yearsnearer birthday.
ii) The member should normally be the head of the family or one earning member of the below poverty line family (BPL) or marginally above the poverty line under identified vocational group/rural landless household.
Nodal Agency:
“Nodal Agency” shall mean the Central Ministerial Department/State Government / Union Territory of India/any other institutionalized arrangement/any registered NGO appointed to administer the Scheme as per the rules. In the case of “Rural Landless Households”, the nodal agency will mean the State Government/Union Territory appointed to administer the Scheme.
Age Proof:
a) Ration Card
b) Extract from Birth Register
c) Extract from School Certificate
d) Voter’s List
e) Identity card issued by reputed employer/Government Department.
f) Unique Identification Card (Aadhar Card)
Premium:
The premium to be charged initially under the scheme will be Rs.200/- per annum per member for a cover of Rs.30,000/-, out of which 50% will be subsidized from the Social Security Fund . In case of Rural Landless Household (RLH) remaining 50 % premium shall be borne by the State Government/ Union Territory and in case of other occupational group the remaining 50% premium shall be borne by the Nodal Agency and/or Member and/or State Government/ Union Territory.