My account
Get into your account.
LoginRegister
Plans
Home Learn History Food, Drinks, Pastimes and Amusements of Vedic Aryans 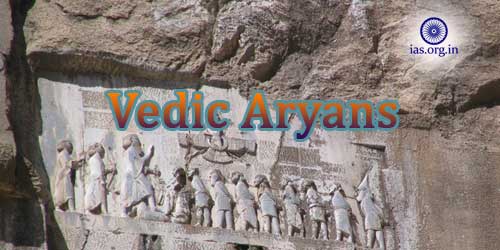 The principal diet of the Vedic Aryans comprised of barley flour, rice and other cereals, milk, clarified butter, curd and other preparations of milk and meat of different types. Rig Veda frequently mention Yava (barley) and dhanya (rice).

In later Samhita (Vedic texts) rice (Vrihi) is mentioned along with various species of Yava. Beans (mudga), sesamum (tila) and many other grains such as wheat (godhuma) and wild rice (nivara) are mentioned quite often.

There is no doubt that vegetables and fruits formed a large portion of the diet; however, it cannot be denied flatly that the Vedic Indians were also meat-eaters. But, meat-eating was strictly prohibited to men who were under some oath/vow.

Mansaudana (meat cooked with rice), in the Vedic Age was quite a favourite item, even a delicacy. The growing sanctity of cow certainly indicates that eating of its flesh was tabooed. The Rig Veda describes cow as aghnyai, meaning not to be be killed. However, the meat of oxen, sheep and goat was not forbidden and even Brahmans had to eat them when it were offered as a sacrifice. It was only at Horse-sacrifice ceremony that the horse-flesh was eaten.

Milk, undoubtedly, was the favourite drink of the pastorial Aryans. Its main products consisted of curds (amiksha), sour milk (dadhi), fresh-butter (navanita) and different kinds mixtures, hot or cold. Apupa was a mixture of rice or barley prepared with ghee or clarified butter; and adana was a savoury mess generally of grain cooked with milk. The later Vedic texts also talks of fried grains of rice and barley gruel (Yavagu).

Must Read: The Rig Veda Age : Religion and Philosophy

Soma and Sura, intoxicating drinks, were quite popular with the Vedic Aryans. Since Soma was treated as a sacrificial drinks, its praise has been sung in the whole of the ninth of book of the Rig Veda. The Soma plant grew on the mountains; the mountain Mujavant was specially for it from where the Soma plants were obtained with great difficulty. The substitutes of thisplant were permitted in the Brahmana period.

In order to prepare it for use the plant Soma was pounded with stones or in a mortar; after that it was offered in a vessel, termed as Chamu, to the gods. This offerings were in turn, poured into vessels called Kalasa and Chamasa from which priests took it.

It was pur as well as mixed with milk (gavasir), or curd or Sour milk (dadhyasir) or grain (Yavasir) and sometimes with honey, Sura (win)- a popular drink distilled from grain. This drink was extremely intoxicating and was not approved by the priests. Its use caused people to be arrogant to the extent of slandering the gods and incurring sins.

Pastimes and Amusement of Vedic Aryans

As Aryan were horse-loving and chivalrous people, the most popular and prominent amusement of the Vedic Aryans comprised of the chariot race.

Although frequently a cause of lament, the dicing was also a favourite pastime. The Rig Veda does not provide detail of this game; however, several passages of the later Samhitas and Brahmanas provide lists several expressions linked with dicing.

There is no evidence of boards to be used for the purpose of dicing, but a depression was made in the ground into which the dice (aksha) was thrown. There is also the reference to the stake termed vij. Serious losses could be met in the gam, comprising that of property and even the loser’s wife. With all its fateful consequences, the game of dicing continued for a long time as we find reference of its judge (akshedaisaka) in later times too.

The favourite pastimes of Vedic Aryans were music and dancing. The Rig Veda’s frog-hymn refers to the musical chating of Brahmanas engaged in the extraction of Soma.

There remain references of three kinds of musical instruments- dundhubi (drum) used both in war and peace; Karkari (something like a flute); and Kshoni (Vina).

Both women and men danced in Rig Vedic times. The make dancer was called nrita and the female nritu. Swinging was also a popular pastime. One can also find the references to fairs (Samana) people showed off their talents archery, sport, etc, and they (the fairs) served the purpose of establishing social contacts.

As, with the time, social life pastimes and amusements also increased.

Professional Musicians were quite in demand as there were various types of musical instruments. These instruments consisted of aghati (cymbal), drums, flutes and lutes of various types, and the harp having hundred strings.

The Yajurveda talks of acrobats or pole dancers (Vainsanartin). Chariot racing and horse racing continued to be famous pastimes and the chariot racing was closely linked to the Vajapeya ceremony. Dicing was restricted but as a game was nevertheless allowed.

It can be summed up that the Vedic Aryans, as pastoral, people were fond off rearing their cattle, especially cows that were probably looked after even to the extent of invoking divine sanction for their protection. The cows were kept in shed during the night and in the heat of the day, but were allowed free movement in pasture lands.