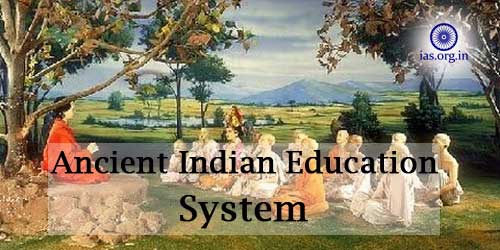 As recorded in the Vedic texts the Ancient Indian Educational System with the residential hermitage of the seer serving as a school remained the same for a long time. It was only in the Gupta period that big centers of learning like modern universities with different faculties, extensive buildings, libraries and facilities for communication began to be founded. However, in post-Vedic times the curriculum of studies was modified. It transformed from being purely ritualistic to being broad based that included subjects such as grammar, philosophy and those of a secular nature.

Although the house of the teacher undoubtedly continued to be the centre of learning for a long time, knowledge was also spread through Charakas (popularly known as wandering teachers) and also through parishads (assemblies of intellectuals).

However, records suggest that in the ancient Indian educational system education was, if not primarily then to a certain extent, caste-oriented: for instance, a Brahman bay used to acquire only Vedic education that was necessary for his professional duties such as the performance of sacrifices and teachings. On the other hand, a Kshatriya boy used to acquire practical training in the use of arms, and literary and Vedic studies and in State-craft as well, because all these were helpful to him in his future career. Similarly the Vasya had to be well-versed in commercial subjects.

Thus, it may be suggested that education was fast becoming job-oriented and that the pursuit of knowledge was not merely for the sake of knowledge alone.

Any attempt to comprehend the ancient India educational system should be done with particular reference to objects of study, place, and time, method, curriculum, different kinds of teachers and schools of learning, pupil-preceptor relations, women’s education, fees, writing, spread of learning and vocational education.

According to the ancient India educational system, the purpose of the study is the training of mind as an instrument of knowledge and not merely to fill it with superfluous matters. It asserts that it is only  education that helps a seeker in developing his personality. Thus the knowledge attained through education provides the vital force in him that is supposed to be useful throughout his life.

According to Brihadaranyaka Upanishad, the seeker of the highest knowledge, the real knowledge that helps in distinguishing the self from the non-self appearing in various forms, should not seek merely the knowledge of books. Similarly, in the Katha Upanishad, it is said in this context that “Not by the study of the Vedas is the Atman attained, nor by intelligence, nor by much book learning. The mind has to be prepared through Sravana  (listening), manan (concentration) and nidhidhyasana (meditation)’. It is very important to mention here that were possible only under an enlightened and accomplished teacher (guru) who himself had attained siddhi (perfection).

It, therefore, can be assessed that education in the ancient Indian educational system had basically a religious and philosophical basis, though its utilitarian value was not completely diminished, as it is explicit from the curriculum.

Must Read: The Vedic Age

Subjects of Study in the ancient Indian educational system

In the time of Patanjali, the pupil was expected to study all the four Vedas, six Angas and their secret treatises, the pathas, the sacred transitions of the Bahuvrichas, the Atharva Veda and its nine branches, treatises on dialogues, the epics, the Puranas, historical legends, vakovakyam (the science of logic), and the vaidyakam (the science of medicine). There are references to the study of Chandasastra (the study of matrics) and Dharmasastra. It is important to mention here that in the time of Patanjali ‘grammer’ was not receiving adequate attention due to which he wrote his commentary.

However, Divyavadana (fourth century AD) prescribes a different elementary course of study that did not commence with the Vedas. According to it the study commenced with the first lesson in reading and writing at the guru’s house who had many other students as well (prabhutadarakah).

At that time in the ancient Indian educational system, the course of study began with the lesson siddham that ended in accomplishments in writing (lipyam), Sankhyam (arithmetic), ganana (accounting) and even in rules related to coinage and exchange. The Smriti authorities mention a sacrament called Vidhyarambha or akshara-svikriti (the beginning of education or learning of the alphabets).

Apart from these subjects of a general nature, the pupil used to study rules of irya (asceticism), Charya (medicany), Saucham (ceremonial purity), Samudacharya (good social form), bhoskara (the proper mode of address) and all the four Vedas. Thus, it seems that several other subjects dealing with grammar, philology and logic, etc., were not in the course of study of the ancient Indian educational system or were optional.

The most important aspect in this context is that all learned Brahmans were expected to have studied all four Vedas, the six Vedangas, the Puranas, Nyaya Mimamsa, and the Dharamsastras thus covering the ritualistic, legalistic, juristic, historical and philosophical aspects.

According to the records of the Gupta period, there were fourteen (or eighteen) subjects, popularly known as vidyas, that were regarded as within the scope of learned Brahmans. In the seventh century AD the Chinese pilgrim Hiuen-Tsang observes that after finishing a work called ‘the Twelve Chapters’’, the children are introduced, in their seventh year, to five sciences: the science of sound or grammar, that relating to arts and crafts, the science of medicine, the science of reasoning and finally the science of internal discipline.

In the eighth year, the pupils took up Panini’s Sutras and the verbal appendix, that they completed in eight month’s time. A good grasp in grammar took another five years. After accomplishing mastery in grammar, the pupil studied hetuvidya (logic), abhidharma (metaphysics) and other allied disciplines. It was at advanced centers of learning that the courses of higher studies were provided.

Professional and Vocational Education in the ancient Indian educational System

Professional education particularly in the field of medicines and surgery, as it was quite different from the one for the Vedic texts, grammar, and other disciplines, sought special attention. The two branches of medical science had acquired considerable significance in ancient India: there are references to physicians (bhishag) even in Rig Veda, and Taxila was an important seat of medical science in the six century BC with Jivaka, Ajatsatru’s famous physician, receiving his education there.

However, till the time of Charaka and Susruta of the Christian era, there is no information regarding the pattern for imparting instruction in these sciences. Susruta, while furnishing information on the initiation of pupil in the medical sciences says that the student desirous of studies in medicine had to be dvija (one of the twice-born castes) of tender years (vayas), belonging to a good family (anvaya) and gifted qualities like sila (calm temper), saurya (prowess), saucham (purity), Vinaya (modesty), saktibala (capacity and strength), Prasannachita (contended frame of mind), Vakya chestam (pleasant in speech) and klesasham (painstaking in efforts).