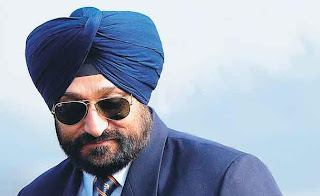 General Bikram Singh, PVSM, UYSM, AVSM, SM,VSM is the 25th chief of the world’s second-largest army. He was commissioned on March 31, 1972, into the Sikh Light Infantry (SIKHLI) Regiment. His colleagues remember him as a bright cadet at the Indian Military Academy (IMA), where he held the appointment of Battalion Cadet Adjutant (BCA).
The affable cadet, known as ‘Bikki’ to his friends, topped the Young Officer’s course at the Infantry School and was adjudged the ‘Best Young Officer.’ He was also awarded the prestigious ‘Commando Dagger’ for being the best commando along with ‘Best in Tactics’ trophy.
It was during his tenure as an instructor at the Commando Wing of the Infantry School that General Singh met the woman he would marry. Then a young Captain, he met, Surjeet Kaur – popularly known as ‘Bubbles’ in army circles – at a family wedding. “It indeed was love at first sight,” the General recalled. “Within a week, things were arranged and we got engaged. However, I was not happy with the marriage being fixed after six months. So, I called her up from Belgaum and told her to be prepared for marriage within a month. Of course, this required convincing parents and family members on both sides.” Bubbles joined him at the Commando Wing of the Infantry School within the stated time-frame.
“During various demonstrations that used to be organised for the public, I ensured that Bubbles was present to see and appreciate our commando skills and techniques,” he shared.
“Bikki’s friends ensured that for nearly a month-and-half, I didn’t have to cook any meal after I joined him. Either we were invited to a friend’s house or they would send us meals at home,” says his wife. They have two sons.
After the ‘Higher Command Course’, he served his first tenure in the Military Operations (MO) Directorate. The tenure, as a Director, coincided with the Kargil war and he was assigned to brief the media on the daily progress of the conflict. Later, he was also made responsible for writing the official version of the war history.
He went on to serve four more important tenures at Army HQ which included one additional tenure in the MO Directorate as the Deputy Director General, thereafter, two tenures in the Perspective Planning Directorate, initially as the Deputy Director General of Perspective Planning (Strategy) and later, as the head of the Army’s ‘Think Tank’ as the Additional Director General (the appointment now has since been upgraded to the post of Director General). He would later return to Army HQ as a Lieutenant General to serve as the Director General Staff Duties (DGSD) that facilitates the overall functioning of various branches of Army HQ, and serves as an interface with other government agencies besides looking at the Indian Army’s training teams abroad and UN peacekeeping operations.
In between the ‘Staff’ roles, Gen Bikram Singh went on to command several other operational field formations. These include command of a Rashtriya Rifles Sector in South Kashmir, an Infantry Division in J&K and the prestigious 15 Corps at Srinagar. His tenure later as the Army Commander of Eastern Command was also marked by significant improvements in both the conventional and sub-conventional war-fighting arenas.
As a Brigadier, he was selected to attend the US Army War College, Pennsylvania, where besides excelling in academics he also won the International Toastmaster’s award in public speaking.
His international forays with peace-keeping missions include two assignments with the United Nations in Central America (ONUCA and ONUSAL) and as the Deputy Force Commander and GOC of Eastern Division in the Democratic Republic of Congo.
Colleagues remember him for being a ‘soldier’s soldier’ for spending time and working hard with his troops on the ground.
Gifted with a razor-sharp memory for details, General Singh is known to often surprise old friends – even those he has not met in decades – with references to their family members and memories of time spent together.
The army chief as a young boy studied at Punjab Public School, Nabha. An avid sportsman, cricket, athletics and hockey were his favourite games in school. Singing and painting were his other talents that also fetched him awards in school. “Classical songs and ghazals are my favourites,” he reveals.
As a young student, the chief had considered becoming a doctor. He was an exceptional student of Zoology and Biology. But the wars of 1962 and 1965 motivated him to join the NDA in 1968. When asked whether he ever regrets the choice made, Gen Bikram says, “If I were ever to be born again, I would only join the Indian army.”