Basic Principles of the Constitution 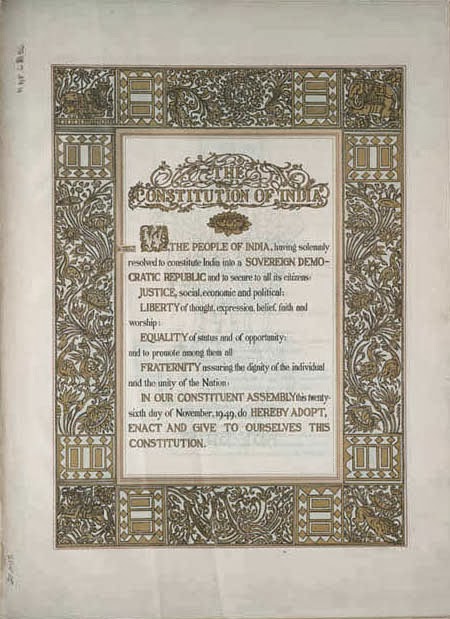 Every constitution reflects the ideas and ideals of the people who framed it. Although it is intended to be a document of permanent value, it is bound to reflect also the conditions and circumstances of the period in which it was framed. The Constitution of India is no exception to this; it embodies certain basic principles. Let us, therefore, begin with a study of these Basic Principles of the Constitution which form the foundations of the democratic government of India.

Basic Principles of the Constitution


This Basic Principles of the Constitution is reaffirmed in several places in the Constitution, particularly in Part XV dealing with elections. The elections to the House of the People (Lok Sabha) and the Legislative Assembly of every State have to be held on the basis of adult suffrage. Further, such elections must take place at least once every five years. The Constitution also ensures the democratic ideal of “one man, one vote, one value” irrespective of his wealth, education, social status or importance otherwise.


This was perhaps the most fundamental Basic Principles of the Constitution and far-reaching decision of the founding fathers of our Constitution. It was, indeed, an act of faith,  homage to the people of India and implicit in the liberal outlook of India’s freedom struggle. India, thus, became the largest democracy in the world. In 1952, when India went to the polls for the first time under the Constitution, the number of eligible voters was around 173 million. In 1984, for the Eighth General Elections, the number was as large as 389 million. For the Ninth General Elections held in November 1989, the number of eligible voters was about 499 million, which included 35 million in the 18-21 age group who became eligible for the first time following the Sixty-first Constitution Amendment in 1988 amending Article 326. For the 1991 General Elections, the electorate swelled to more than 514 million, in 1999 to 620 million, in 2004 to 650 million and in 2009 it rose to 714 million.


The framers of the Constitution were not satisfied by merely providing for universal adult suffrage. They wanted also to ensure free elections by creating an independent constitutional authority—the Election Commission of India—to be in charge of everything connected with the elections.


Free elections are a reality in India. They secure for the electors both the freedom of choice from among the competing candidates who stand for different programmes and policies, and the secrecy of the ballot. The fifteen General Elections that independent India has so far had, at almost regular intervals since 1952, have demonstrated that in spite of their poverty and widespread illiteracy and difficulties in communication, the people in general, have been able to exercise robust common sense in electing candidates of their choice and, thus, exercise their supreme authority in setting up a democratic, responsible government. India has also been well known for the high percentage of voter participation in all the elections. Numbers and percentages apart, a very significant feature of these elections is* the remarkable involvement of the common citizen with the machinery and functions of democratic self-government, the steady growth of political consciousness and the highly competitive character of Indian politics.

The success or failure of a democracy depends largely on the extent to which civil liberties are enjoyed by the citizens in general. Liberty, however, is not an easy term to define. “The world has never had a good definition of the word ‘liberty’,” said the US President Abraham Lincoln on April 18,1854, soon after the American Civil War on the question of slavery, “and the American people, just now, are much in want of one. We all declare for liberty, but in using the same word we do not all mean the same thing. With some, the word ‘liberty’ may mean »for each man to do as he pleases with himself arid the product of his labour, while with others the same word may mean for some men to do as they please with other men and the produce of other men’s labour. Here are two, not only different but incompatible, things called by the same name ‘liberty’. And it follows that each of the things is, by the respective parties, called by die different and incompatible names—liberty and tyranny.”

Genuine democracy must forever guard against the temptation to transform itself into a system under which the ruling majority claims, infallibility for itself. While democracy requires that the will of the people limits the freedom of the government, it also requires that the freedom of the popular will be limited. A popular will not so limited becomes the tyranny of the majority which destroys the freedom of political competition and, thus, uses the powers of the government to entrench itself permanently in the seat of power and to prevent a new majority from forming. Further, it will tend to think and act as if it will provide the ultimate standard of thought and action and there is no higher law to limit its freedom. As Professor Harold Laski has beautifully put it, “If in any State there is a body of men who possess unlimited political power, those over whom they rule can never be free.” The emergence of such a state of affairs will result in the disappearance of certain vital characteristics of democracy, the spirit of questioning and individual initiative. Their place will be taken up by unquestioned submissiveness and conformity, the most distinguishing characteristics of a totalitarian system. This is perhaps the most serious danger inherent in the dynamics of modern democracy which is to be strongly guarded against.
There are two possible alternative safeguards which a constitution can provide to remedy the situation. First, it can guarantee certain basic rights to the individual citizen against all encroachments by the State. Secondly, it may so divide the powers of the State and entrust them to separate agencies that nobody possesses unlimited power. The Constitution of India has chosen the first alternative and tries to achieve the objective by embodying in it a set of fundamental rights and guaranteeing them through an independent judiciary. These rights impose limitations both on legislative and executive powers of the State. On the one hand, the legislature is prohibited from passing certain laws which would curtail the individual’s freedom, and on the other, the executive is compelled to adhere to certain formalities and procedures when it deals with the citizens. Thus, in an attempt to secure fundamental freedoms, the Constitution delimits the respective spheres of activity of the State and the individual and erects a wall, as it were, between the Government and the people.

The Basic Principles of the Constitution that every individual is entitled to enjoy certain rights as a human being and the enjoyment of such rights does not depend on the will of any majority or minority. No majority has the right to abrogate* such rights. In fact, the legitimacy of the majority to rule is derived from the existence of these rights. These rights include all the basic liberties such as the freedom of speech, movement and association, equality before the law and equal protection of laws, freedom of religious belief, and cultural and educational freedoms. The Constitution has classified these rights into seven categories and one of them is the right to constitutional remedies which entitles every aggrieved person to approach even the Supreme Court of India to restore to him/her any fundamental right that may have been violated.

It must be stressed, however, that the fundamental rights guaranteed by the Constitution are not absolute. Individual rights, however, basic they are, cannot override national security and general welfare. For, in the absence of national security and general welfare, individual rights themselves are not secure. Freedom of speech does not mean freedom to abuse another person; freedom of movement does not mean freedom of settlement/movement to “sensitive areas”. The Constitution has made express provisions dealing with such limitations of fundamental rights so that those who seek to enjoy the rights may also realise the obligations attending them
Must Read:
Fundamental Rights Detailed Analysis Part I
Fundamental Rights Detailed Analysis Part 2
Fundamental Duties Incorporated in Constitution of India

The Government of India (GoI), officially known as the Union Government and also known as the Central Government, was established by the Constitution of India, and is the...
Read more
Polity

The Panchayati raj is a South Asian political system mainly in India, Pakistan, Bangladesh and Nepal. It is the oldest system of...
Read more
Polity

Right To Information Act, 2005Right to Information Act is a revolutionary step in the direction of making the system of governance and administration...
Read more
Polity

Politics in India takes place within the framework of a constitution. India is a federal  parliamentary democratic republic in which the President of India is head of...
Read more
Polity

Facts about PREAMBLE of the Indian Constitution

Indian Constitution has been framed by the congress Assembly by working committee on June 24, 1946. In the meeting of the Constituent Assembly, Congress adopted...
Read more