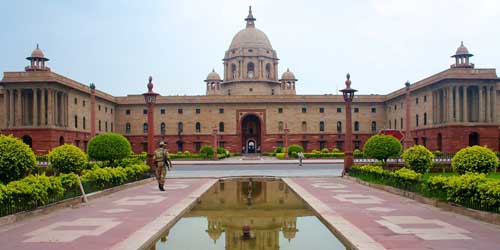 The President of India is indirectly elected by the people through elected members of the Parliament of India (Lok Sabha and Rajya Sabha) as well as of the Legislative Assemblies in States of India (Vidhan Sabha) and serves for a term of five years.

The Constitution of India states that the President can exercise his or her powers directly or by subordinate authority, with few exceptions, all of the executive authority vested in the President are, in practice, exercised by the popularly elected Government of India, headed by the Prime Minister. This Executive power is exercised by the Prime Minister with the help of the Council of Ministers.

Must Read: All Presidents of India and their Tenure

The 14th and current President is Sh. Ram Nath Kovind, who was elected on 20 July 2017, and sworn-in on 25 July 2017. He is the second Dalit leader to be elected as President of India. Earlier he was Governor of Bihar and Member of Rajya Sabha prior to that. He took over the position from Sh. Pranab Mukherjee, who was the first Bengali to serve in the office.

India achieved independence from British Rule on 15 August 1947. The Constituent Assembly of India, under the leadership of Dr. B. R. Ambedkar, undertook the process of drafting a completely new constitution for the country. The Constitution of India was eventually enacted on 26 November 1949 and came into force on 26 January 1950, making India a republic. The offices of monarch and governor-general were replaced by the new office of the President of India, with Rajendra Prasad as the first incumbent.

The President of India can return a bill to the Parliament, if it is not a money bill or a constitutional amendment bill, for reconsideration. The President appoints, as Prime Minister, the person most likely to command the support of the majority in the Lok Sabha.

All money bills originate in Parliament, but only if the President recommends them. He or she presents the Annual Budget and supplementary Budget before Parliament. No money bill can be introduced in Parliament without his or her assent.

The President of India can declare three types of emergencies: national, state, financial.

A President can be removed for violation of the Constitution of India. The President may be removed before the expiry of the term through impeachment. No president has faced impeachment proceedings.