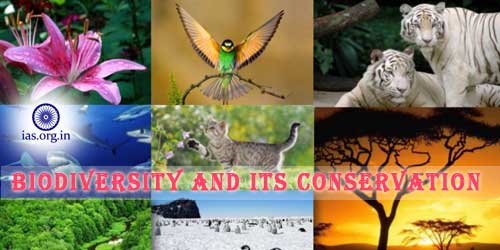 In the year 1992 International Union for Conservation of Nature and Natural Resources (IUCN) and United Nations Environment Programme (UNEP) defined the term ‘Biodiversity’ as “The totality of genes, species, and ecosystems in a region.” In fact the term is made up of Bio meaning Life and Diversity meaning Number of Species of plants, animals or microbes. The term Biodiversity was coined in 1985 by Walter G Rosen.

Biodiversity, that is also known as biological diversity, can be sub grouped at three levels:

Genetic Diversity consists of the genetic variation within species at finer levels of organization.

Species Diversity comprises in itself all the species of plants, animal and micro-organisms on earth at its basic level.

Community/Ecosystem Diversity: It consists of, on a wider scale, variations in the biological communities in which species (living beings) live, the ecosystem in which communities exist and interacts among themselves at these levels.

Also Read: The Earth and the Universe

Some species, within biological communities, are significant in determining the ability of large number of species to continue in the community. These significant species are termed as “Keystone species”, this term was mentioned by Paine in 1966 and Howe in 1984. In conservation efforts a priority has been accorded to these ‘keystone species’ because their loss may result in the loss of numerous other species from a conservation area.

In 1990s biodiversity hot spots were originally identified by Norman Myers. It is also called or termed Conservation hot spots. These are areas which face serious threat from human activities and contain a unique biodiversity with representatives of evolutionary process of speciation and extinction. Hot Spots are basically defined as geographical zones that possesses high number of endemic species that are not found anywhere else on this planet.

The total areas of remaining habitat of the endemic species covers only 2.3 percent of the Earth’s land surface. Each hot spot faces serious threats and has already lost at least 70 percent of its original vegetation. About 42 percent of all terrestrial vertebrate species and 50 percent of the world’s plant species are endemic to the biodiversity hotspots.

Although some of these hotspots are already protected, more than a billion humans live in these areas which are heavily farmed. Though the number of hotspots in the world has now increased to 34, just 1.4% of the land supports 60 percent of the species of plants and animals on the earth.

Thus as the places of rich biological diversity endowed with a super abundance of unique species of plants and animals these hotspots are thought to contain nearly 20 percnt of the world’s plants species on a mere 0.5 percent of its land.

The rate of deforestation in these areas is very high and the ecosystems have reached a brittle stage.

Don’t Miss: The Himalayas: An insight into their evolution and importance

Monoculture- In order to meet the immediate demand of foodgrains and keeping in mind the merlcet, the practice of growing few species at the expense of the others has inflected a serious loss of biodiversity. It takes just three species- wheat, rice and Maize– to cater half of the world’s food; potato, barley, cassava and sweet potato bring it to three-fourth.

Presently, an average of sixteen species are being consumed by people. In addition, the disease such as Bird Flue can spread rapidly through Monoculture that in turn increases the threat to biodiversity.

Pollution- Pollution contributes in wiping out species, especially the endangered species and those part of the fragile ecosystem such as the marine ecosystem of the gulf region that has been affected due to oil spills.

Some other threats to biodiversity

It can be asserted, therefore, that only judicious use of our natural resources is the only remedy that can help us in preserving our biodiversity. According to the general secretary of United Nations (UN), Ban Ki Moon, “Biodiversity is being lost at an unprecedented rate, the global response to these challenges need to move much more rapidly and with much more determination at all levels.”

On the natural resources the increasing demand of population has acquired such a proportion that it has become a serious threat to wild life and the life support systems of the planets. So it is very important to take serious measures for the conservation of biodiversity with an intention to reinstate the balance between environment and human.

Steps for the conservation of biodiversity