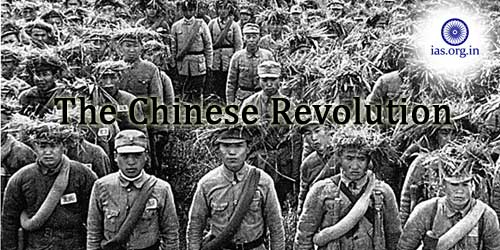 People become revolutionaries after many years of suffering under an established system. Upheavals, led by these people, do not regard any existing values and usually becomes violent.

Chinese revolution was not a single event, but a series of upheavals, uprisings and rebellions, mostly leading to violence. To understand the nature of Chinese Revolution it is important here to go through the famous definition of Revolution provided by Mao Zedong under whom CCP (Chinese Communist Party) made the government by formally establishing the People ’s Republic of China. He said, “Revolution is not a dinner party, nor an essay, nor a painting, nor a piece of embroidery; cannot be advanced softly, gradually, carefully, considerately, respectfully, politely and modestly. A revolution is an insurrection, an act of violence by which one class overthrows another.”

Also Read: India and South-East Asia in the Ancient World

Events leading to the Chinese Revolution

A series of political upheavals took place in China, between 1911 and 1949, that consequentially led to the Chinese Revolution. First, in 1911 the imperial dynasty ruling over China at that time was overthrown.

The imperial government took over the railways and the students took to streets on 24 August 1911, demanding a delay in takeover . A violent conflict between troops and the protesters broke out in which thirty two people were killed.

The revolution of 1911, as an ingredient to the Chinese Revolution, was unusual because it was initiated by the conservative and wealthy gentry, and not by the poor. The leaders of the uprising did not want to dislodge the imperial government; they rather wanted their financial concerns fulfilled. When they realized that the imperial government was not ready to even negotiate with them, they rebelled.

It was from the very beginning the desire of Dr. Sun Yat-Sen, who later was honoured by getting the most prestigious designation, a leader of a Chinese revolution gets, of the founding father of the Republic of China, to overthrow the Manchu dynasty. After ten unsuccessful attempts he finally emerged successful in 1912 when Emperor Pu Yi was dethroned.

Sun Yat Sen, who believed in strong ideals, joined hands with general Chiang Kai-Shek, a military leader, and formed a new party namely the Nationalist Party which in 1913 won a majority of seats in the national Assembly.

Chiang Kai-Shek led an expedition known in history as the Northern Expedition that resulted in the reunification of most of China under a National Government based in Nanjing. Although, Kai-Shek presided over a modest programme of reform in China, almost all resources of the government were employed on fighting internal opononents, including the Communist.

The period from 1916 to 1930 s is famously known as the Warlord Period in the history of the republic of China. It was a period when the country was divided among military rulers. The Warlord Era, true to its name, was characterized by constant warfare, dragged China into an interminable economic and political instability. The Warlords maintained total control over their regions by their personalaemies. Although they dominated Chinese politics during the early years of the Republic of China, their rule ended rather abruptly of 1928.

In the modern Chinese history, this movement as a part of the Chinese Revolution, deserves special mention because it was the first mass movement. It began as a patriotic eruption against foreign imperialists and warlords. On 4th May 1919, about 5,000 University students protested the Versailler Agreement that awarded the former German leasehold of Jiaozhou to Japan.

The People’s Republic of China was formally established on 1 October, 1949 with its national capital at Beijing. The creation of a people’s democratic dictatorship, to be led by the CCP (Chinese Communist Part), was announced by Mao Zedong.

The Cultural Revolution and its background

The Cultural Revolution, the parallel revolution of the Chinese Revolution, was in fact a struggle for power within the Communist Party of China. It transformed into a widespread social, political and economic violence. A large section of society fell into chaos that eventually dragged the entire country to the brink of Civil War.

The political changes after the communist takeover in 1949 resulted in sweeping social changes. In the process of the consolidation of the power and authority of the Communists, the houses of the former ruling classes were confiscated, and any items that did not comply to Mao’s values were destroyed.

In 1957, Mao Zedong proposed an increase in the industrial growth and to accomplish it he began the ‘great leap forward’ by setting up special communes, that were units of administration, in the countryside. These communes used collective labour and mass mobilization of peasants to enhance the production of steel and to increase agricultural production. However this did not work and the ‘great leap forward’ failed.

The Cultural Revolution, proving to be an offshoot of Chinese Revolution, of all other things, was a method to regain control of the party after the disastrous ‘great leap forward’ that led to a significant loss of Mao’s power to his rival Liu Shaoqi.

Don’t Miss: The Revolt 1857: the First War of Independence