My account
Get into your account.
LoginRegister
Plans
Home Learn History Classical Dances of India: Mirror of Cultural India 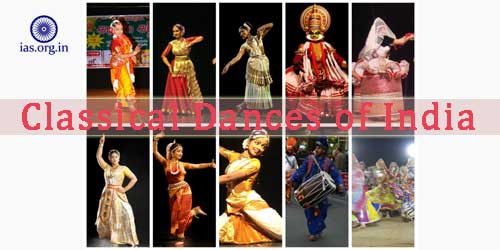 Due to her various climate conditions, India in all spheres of its life is a land of diversities that have made her culture a unique one. Being true to the nature of India, there are various kinds of classical dances (dance forms) in India.

There are principally two groups of Indian Dances: (i) Indian classical Dances and (ii) Indian Folk Dances. The classical dances of India are generally full of spiritual content whereas Folk dances are mainly representative of celebratory mood, although they are also religious and spiritual in content.

Must Read: Life in the Gupta Period

Indian can boast of having some of the world-famous dance forms that originated and evolved in India as she has thousands of year old tradition of classical and folk music and dances. These well-known classical dances are: Kuchipudi of Andhra Pradesh; Kathakali and Mohiniattam of Kerala; Manipuri of Manipur; Odissi of Orissa; Bharatnatyam of Tamil Nadu and Kathak of Uttar Pradesh.

“Mudras” which were originally performed in temples to entertain many Gods and Goddesses, were frequently and basically used in these classical dances. The classical dances also effectively ‘discharged a unique service of carrying forward many mythological stories from generation to generation along with entertaining the audiences too. These dances slowly and steadily with times transformed into a part of ‘Natya Shashtra’ that was propounded by Rishi Bharata. He propounded it with an intention to compose and frame some rules and regulations of entertaining arts.

One of the most popular classical dances of India, Bharatnatyam, has got more popularity in Southern Indian States of Tamil Nadu and Karnataka. Bharatnatyam, believed to be almost 2,000 years old, according to the trading was revealed by Lord Brahma to Bharata, the famous rishi, who condified this holy and sacred dance in a Sankrit text that is famously known as Natya Shashtra and is one of the a famous treatises on India drama.

Kuchipudi, that has got its name from the Kuchipure ‘village of Andhra Pradesh, is one of the classical dances of the South India. The story goes like this-in the seventeenth century the village Kuchipudi was presented to those Brahmins who were experts in performing dance and drama. The most striking feature feature of Kuchipudi is that it manifests scence from the Hindu Epics, legends and mythological takes through fusion of music, dance and acting. It also consists of pure dance mine and histrionics, however it is the use of speech that characterizes Kuchipudi as a dance drama.

Kathakali, the classical dance from Kerala, literally means “story-Play” and is widely known for its heavy, elaborate makeup and colourful, fascinating costumes that have, in fact, become the most recognized icon of Kerala. Widely acclaimed as one of the most exquisite theatres of imagination and creativity- Kathakali presents themes which are taken from the Ramayana, the Mahabharata and other Hindu epics, mythologies and legends.

The name Mohiniattam, a classical dance of Kerala, has its orgin in the words “Mohini” (beautiful women) and “attam” (dance). Justifying its name, Mohiniallam dance exhibits a beautiful feminine style with surging flow of body movements. Developed in the tradition of Devdasi system in Kerala, Mohiniattam later grew as a classical dance form.

One of the most important classical dances of India, Kathak, as a dance form, originated in north India (precisely in Uttar Pradesh) and resembled with the Bharatnatyam dance. The word Kathak for the dance form is said to be derived from the word Katha (the art of story telling). There were bards or Kathakars in ancient India who used to recite mythological and religious tales blended in music, mine and dance.

Must Read: The Vijayanagar Empire: Social life and Economic condition

One of the widely known classical India dances Odissi from the State or Orissa is highly inspired, ecstatic, passionate and sensuous form of dance. It has a history of 2000 years. Odissi, like classical dances of South India, has its origin in the devdasi tradition. Orissa has a great cultural history.

Belonging to one the six important classical dances of India, Manipur, whose style is intricately women into the life pattern of the people of Manipur, is indigenous to Manipur, the North eastern state of India. The colourful decoration, delicacy of abhinaya (drama, acting), lightness of dancing foot, tilting music and poetic charm are the most striking features of the Manipuri dance that is mostly ritualistic which extracts mainly from the rich culture of Manipur.

Indian folk dances, outcome of various and different socio-economic set-up and traditions, are simple and are performed, essentially, to express joy. They are performed on every possible occasion, birth of a child, a wedding and festivals thus becoming an integral part of our social milieu. These dances are very simple having minimum of steps or movement. Each form of folk dances has a specific costume and rhythm. Most of the costumes used in folk dances are colourful with a lot of jewels and designed.