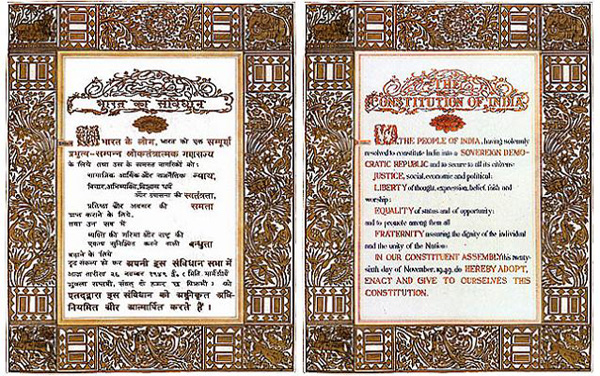 The Constitution of India is the supreme law of India. It lays down the framework defining fundamental political principles, establishes the structure, procedures, powers, and duties of government institutions, and sets out fundamental rights, directive principles, and the duties of citizens. It is the longest written constitution of any sovereign country in the world, containing 448 articles in 25 parts, 12 schedules, 5 appendices and 98 amendments (out of 120 Constitution Amendment Bills).

The Constitution was adopted by the India Constituent Assembly on 26 November 1949 and came into effect on 26 January 1950. The date of 26 January was chosen to commemorate the Purna Swaraj declaration of independence of 1930.

The Constitution declares India to be a sovereign, socialist, secular, democratic republic, assuring its citizens of justice, equality, and liberty, and endeavors to promote fraternity among them. The words “socialist” and “secular” were added to the definition in 1976 by constitutional amendment (mini-constitution). India celebrates the adoption of the constitution on 26 January each year as Republic Day.

At the time of commencement, the constitution had 395 articles in 22 parts and 8 schedules. It consists of almost 80,000 words and took 2 years 11 months and 18 days to build.

The Indian Councils Act 1892 established provincial legislatures and increased the powers of the Legislative Council. Although these Acts increased the representation of Indians in the government, their power still remained limited. The Indian Councils Act 1909 and the Government of India Act 1919 further expanded participation of Indians in the government.

The major portion of the Indian subcontinent was under British rule from 1857 to 1947. When the Constitution of India came into force on 26 January 1950, it repealed the Indian Independence Act. India ceased to be a dominion of the British Crown and became a sovereign democratic republic.

First Revolution of India, 1857 urged British Government to pass this Act. To calm down the after effects of 1857 revolt, the Act of 1858 was introduced. This act abolished East India Company and transferred powers towards the British crown to establish a direct rule.

Indian Councils Act 1861 enacted by Parliament of the United Kingdom that transformed the Viceroy of India’s executive council into a cabinet run on the portfolio system. This cabinet had six “ordinary members” who each took charge of a separate department in Calcutta’s government: home, revenue, military, law, finance, and (after 1874) public works.

Schedules in Constitution of India