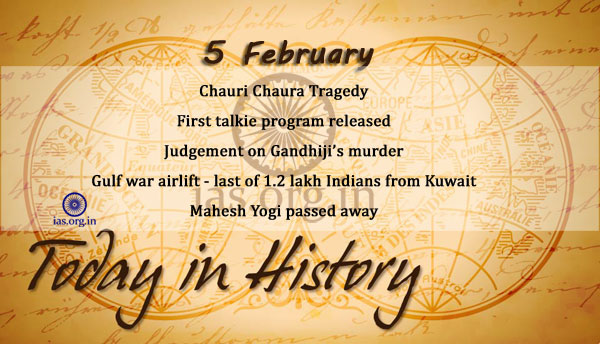 Chauri Chaura tragedy occurred in Gorakhpur District of United Province on this day, Gandhiji, following Chauri Chaura (U.P.) tragedy in which 22 police constables and one sub-inspector were burnt to death by a mob, fasts for five days and abandons Non-Cooperation Movement.

Krishna Film Co., Bombay produced a 7,659 feet long ‘Krishnatone Talkie Programme No. 1’, which was released quite before the release of ‘Alam Ara,’ first talkie film of India. The Krishnatone Programme was censored at C.C. No. 9906 on February 5 and the programme contained the following:

Judgement on Gandhi’s murder; Godse and Apte to be executed.

Gulf War airlift – The last of 1.2 lakh Indians in Kuwait manage to return to India.

In a historic judgement of its kind the Supreme Court directs the Union Government to forcibly produce Manipur Speaker Dr. Borobabu Singh before it on March 23 in a contempt case.