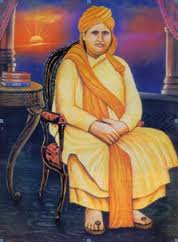 Dayanand Saraswati is well known as the founder of the Arya Samaj, a Hindu reform movement of the Vedic tradition. He was a profound scholar of the Vedic lore and Sanskrit language. He was the first to give the call for Swarajya as “India for Indians” – in 1876, later taken up by Lokmanya Tilak. Denouncing the idolatry and ritualistic worship prevalent in Hinduism at the time, he worked towards reviving Vedic ideologies. Subsequently the philosopher and President of India, S. Radhakrishnan, called him one of the “makers of Modern India,” as did Sri Aurobindo.

Swami Dayanand was born on February 12, 1824 in Tankara in the western Indian state of Gujarat. At a time when Hinduism was divided between the various schools of philosophy and theology, Swami Dayanand went straight back to the Vedas as he considered them the most authoritative repository of knowledge and truth spoken in the “Words of God.” In order to re-energize Vedic knowledge and reawaken our awareness of the four Vedas – Rig Veda, Yajur Veda, Sama Veda, and Atharva Veda – Swami Dayanand wrote and published a number of religious books, primary among them being Satyartha Prakash, Rig-Vedaadi, Bhasya-Bhoomika, and Sanskar Vidhi.

Swami Dayanand founded the Hindu reform organization called Arya Samaj on April 7, 1875 in Mumbai. His aim was not to found a new religion, but to re-establish the teachings of the ancient Vedas. As he said in Satyarth Prakash, he wanted to true development of human kind by the acceptance of the Supreme truth and rejection of falsehood by through analytical thinking. He was a sanyasi (ascetic) from boyhood, and a scholar, who believed in the infallible authority of theVedas.

Maharshi Dayananda advocated the doctrine of Karma and Reincarnation. He emphasized the Vedic ideals of brahmacharya (celibacy) and devotion to God. The Theosophical Society and the Arya Samaj were united from 1878 to 1882, becoming the Theosophical Society of the Arya Samaj. Among Maharshi Dayananda’s contributions are his promoting of the equal rights for women, such as the right to education and reading of Indian scriptures, and his intuitive commentary on the Vedas from Vedic Sanskrit in Sanskrit as well as Hindi so that the common man might be able to read them. Dayanand was the first to give the word of Swadeshi and Harijan to the dalits and Pariahs(Outcastes) long before Mahatma Gandhi.

The 10 principles of Arya Samaj

Dayanand Saraswati undertook a tour of the entire county, made fiery speeches condemning the caste system, idolatry, and child marriages. He advocated the ideal age for a girl to be between 16 and 24, and for men between 25 and 40. Dayanand Saraswati was the first leader in the field of theology who welcomed the advances of sciences and technology. To him, the Vedas as the source book contain the seed of science, and to him, the Vedas advocate the philosophy of dynamic realism.

Swamiji has been teaching Vedanta in India for more than four decades, and around the world since 1976. In his public talks abroad, Swamiji has spoken at many of the most prestigious American universities, and has addressed international conventions, UNESCO and the United Nations, where he participated in the Millennium Peace Summit.

Due to his radical thinking and approach to the social issues and beliefs Dayanand Saraswati had created many enemies around him. One such enemy of the saint was the Maharaja of Jodhpur. On the occasion of Diwali, the King invited Dayanand Saraswati to Jodhpur and killed him by offering food mixed with poison, in 1883. The king was believed to be against the principles of Dayanand Saraswati.