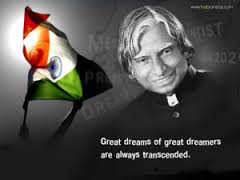 Avul Pakir Jainulabdeen Abdul Kalam usually referred as Dr. A. P. J. Abdul Kalam, is an Indian scientist and administrator who served as the 11th President of India from 2002 to 2007. Kalam was born and raised in Rameswaram, Tamil Nadu, studied physics at the St. Joseph’s College, Tiruchirappalli, and aerospace engineering at the Madras Institute of Technology (MIT), Chennai.

He worked as an Aerospace engineer with Defence Research and Development Organisation (DRDO) and Indian Space Research Organisation (ISRO). Kalam is popularly known as the Missile Man of India for his work on the development of ballistic missile and launch vehicle technology.

He played a pivotal organizational, technical and political role in India’s Pokhran-II nuclear tests in 1998, the first since the original nuclear test by India in 1974. Some scientific experts have however called Kalam a man with no authority over nuclear physics but who just carried on the works of Homi J. Bhabha and Vikram Sarabhai. He narrowly missed achieving his dream of becoming a fighter pilot, as he placed ninth in qualifiers, and only eight positions were available in the IAF.

Dr Kalam is one of the most distinguished scientists of India with the unique honour of receiving honorary doctorates from 40 universities and institutions.

After completing his graduation in 1960, Dr A.P.J. Abdul Kalam joined as a scientist in Defense Research and Development Organization’s Aeronautical Development Establishment. At the very start of his career, he designed a small helicopter for the Indian army. He also worked under the renowned scientist Vikram Sarabhai as a part of the committee of INCOSPAR.

He became the Project Director of India’s first indigenous Satellite Launch Vehicle (SLV-III) when he was transferred in 1969 to Indian Space Research Organization (ISRO). In July 1980 his team was successful in deploying the Rohini satellite near the orbit of the Earth.

In his literary pursuit four of Dr. Kalam’s books – “Wings of Fire”, “India 2020 – A Vision for the New Millennium”, “My journey” and “Ignited Minds – Unleashing the power within India” have become household names in India and among the Indian nationals abroad.

Kalam advocated plans to develop India into a developed nation by 2020 in his book India 2020. He has received several prestigious awards, including the Bharat Ratna, India’s highest civilian honour. The Government of India has honoured him with the Padma Bhushan in 1981 and the Padma Vibhushan in 1990 for his work with ISRO and DRDO and his role as a scientific advisor to the Government.

Kalam is known for his motivational speeches and interaction with the student community in India. He launched his mission for the youth of the nation in 2011 called the What Can I Give Movement with a central theme to defeat corruption in India. He also has interests in writing Tamil poetry and in playing veenai, a South Indian string instrument.

He developed a low-cost Coronary Stent along with Dr. Soma Raju, a cardiologist, in 1998. It was named “Kalam-Raju Stent” after them. Both of them also designed a tablet PC called “Kalam-Raju Tablet” for healthcare in rural areas.