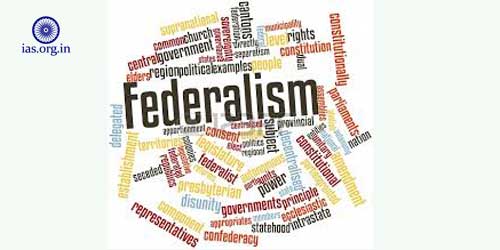 Federalism is a system of Government in which there is a separation of power between a central authority and different constituent units of the century.

Generally, a federation includes two levels of Government: at one level there is a Government for the whole country that is responsible for a few subject of common interest, and at the second level are the governments of states or provinces that take care of much of the day-to-day administration of their state.

In a federalism , although different tiers of Government govern the same citizens , each tier has got its own jurisdiction in specific matters of legislation, taxation, and administration. Jurisdiction , as a legal term , has been defined as ’The area over which someone has legal authority. The area may be defined in terms of geographical boundaries. Or in terms of certain kinds of subject’.

The jurisdictions, in respective levels of Governments, are clearly specified in the Constitution . So the authority of each level of government is constitutionally guaranteed .

Courts have the power to interpret the Constitution and the powers of different tiers of government. The highest court. The Supreme court in the Indian context  functions as an umpire if any dispute takes place between different levels of Government in the execution of their respective powers.

Sources of revenue are clearly specified for each level of government to make sure its financial autonomy. The two most crucial aspects for the institutions and practice of federalism are : Governments, at different tiers , have to agree to some rules of power-sharing ; and they should also trust that each would abide by its part of the agreement. So, it can be asses that an ideal federal system has most curial aspects of federalism that are mutual trust and agreement to leave together.

In case you missed our Youtube video of Federalism

India as a Federal Country

The Constitution of India declares India as a ‘Union of States’. Although the constitution does not use the word federation , the Indian union is based on the principals of federalism. It can be asserted that since all the characteristics of federalism mentioned above are included in the Indian Constitution, India certainly can be termed as a federal country.

The Constitution of India originally catered for a two- tier system of government :The Union Government or the Central Government that represents the Union of India and the State Governments. However, after some time, a third tear of federalism was annexed in the form of Municipalities and Panchayats. These different tiers , as in any federation, enjoy separate jurisdiction so it becomes clear that the Constitution has clearly catered a three–fold distribution of legislative powers between the Central Government and states governments .Therefore, it comprises three lists :

Union List – it contains subjects of national importance such as defence of the country , banking , foreign affairs, communications and courante only the union government can make laws concerning the subjects motioned in this list

State List – it contains subjects of State and local importance such as trade, commerce, Police, agriculture, and irrigation. Only the State government can make laws concerning the subjects mentioned in this list