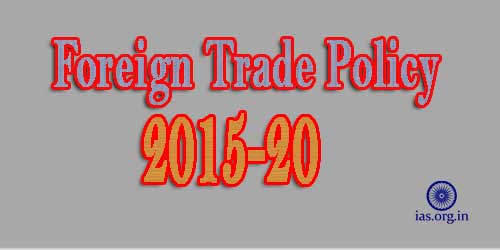 The Government of India, on 1 April 2015, came out with its Foreign Trade Policy (FTP) 2015-20 that would strengthen exports and create jobs while assisting the Centre’s ‘Make in India’ and ‘Digital India’ programmes.

The overall objective of the Foreign Trade Policy is to concentrate on catering assistance to services and merchandise exports and comprises important initiatives such as concentration on export of high value addition products. It aims on improving ease of doing business and debottlenecking to make services globally competitive.

Furthermore, Foreign Trade Policy would concentrate on defense, pharma, environment friendly products and value added exports. The Government is going to continue to incentives units located in Special Economic Zones with an eye on employment-creating sectors and also encourage e-commerce.

FTP 2015-20 caters a framework for enhancing exports of goods and services along with the generation of employment and enhancing value addition, in the country, in pursuit with the ‘Make in India’ programme.

The policy intends to capacitate India to meet the challenges of the external environment, keeping in step with a briskly evolving international trading structure and make trade a major contributor to the economic growth of the country.

e-commerce exports of handloom products, books/periodicals, leather footwear, toys and customized fashion garments through courier or foreign post office would also receive benefit of MEIS (for value up to INR 25,000)

Under Foreign Trade Policy, a slew or steps have been taken to promote manufacturing and exports under 100 percent EOU/EHT/STPI/BTP Schemes. The steps consist of a fast track clearance facilities for these units, allowing them to share infrastructure facilities, granting inter unit transfer of goods and services, allowing them to establish warehouse near the port of export and to use duty free equipment for trading purposes.

The other major focus areas in this new Foreign Trade Policy include trade facilitation and enhancement of the ease of doing business. One of the major objectives of new FTP is to march towards paperless working in 24 X 7 environment.