This year the index ranked 43 countries which include 34 from International Monetary Fund (IMF) advanced economies, 5 from Organization for Economic Co-operation and Development(OECD) member countries and 4 from the BRICS countries (Brazil, Russia, India and China).

It provides a global benchmark for retirees and future retirees so that they can evaluate and compare the suitability of various nations, and plan their retirement according to their expectations and needs.

Global Retirement Index and its relevance: 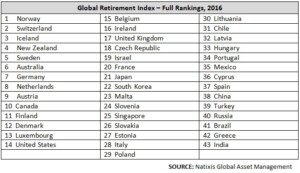 India ranks 43rd and is placed at the bottom of the chart. (Last year, India ranked 88th out of 150 countries). It is even last among BRIC countries.

Sub-indices and its Performance:

Some other important facts: