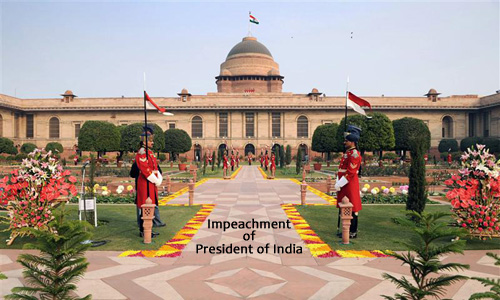 Constitution provides the mechanism for the impeachment of the president to ensure the checks and balances in the powers of legislature and executives. And also to ensure the protection of democratic values. Reasons for impeachment may be following:

Difference between removal and impeachment:

General there exist a confusion between impeachment and removal, for example, the judge of the high court or supreme courts are removed not impeached but to the president of India can not be removed but impeached by Parliament.

Process for Impeachment of President

The Resolution seeking impeachment of the president can be brought in either house of the Parliament.

Such nature resolution (for Impeachment of President) can be brought only after satisfying two pre-conditions:

After the formal introduction in the house, the resolution for impeachment of the president is discussed and passed with the special majority which should not be less than two third of the strength of the house.

After being passed from the first house the resolution goes to the second house which constitutes a committee to probe the charges framed against the President.

All decisions regarding the Probe Committee will be taken by the second house only. Like who will be the member, how many members … etc.

President has right to defend before the committee either on his own or a legal professional of his choice. He can also ask the Attorney General to represent his case.

The process will continue further only if the probe committee prove the charges fully or partially.

The resolution for impeachment of President is then discussed in second house which again passes the resolution with special majority of not less than two third of the total strength of the house.

Powers of The President of India