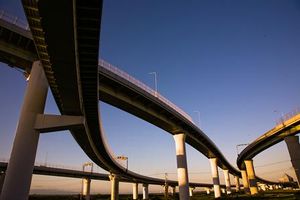 Infrastructure is basic physical and organizational structures needed for the operation of a society or enterprise, or the services and facilities necessary for an economy to function. It can be generally defined as the set of interconnected structural elements that provide framework supporting an entire structure of development. It is an important term for judging a country or region’s development.

Good quality infrastructure is a key ingredient for sustainable development. The basic physical systems of a country’s or community’s population, including roads, bridges, electrical grids, telecommunications, utilities, water, sewage, etc. to prosper and provide a decent standard of living for their populations. These systems are considered essential for enabling productivity in the economy.

Developing infrastructure often requires large initial investment, but the economies of scale tend to be significant. Many developing countries possess poor infrastructure, which hampers their growth and ability to trade in the global economy.

Infrastructure facilitates the production of goods and services, and also the distribution of finished products to markets, as well as basic social services such as schools and hospitals

Engineers generally limit the use of the term “infrastructure” to describe fixed assets that are in the form of a large network.

Infrastructure may be owned and managed by governments or by private companies, such as sole public utility or railway companies. Generally, most roads, major ports and airports, water distribution systems and sewage networks are publicly owned, whereas most energy and telecommunications networks are privately owned. Publicly owned infrastructure may be paid for from taxes, tolls, or metered user fees, whereas private infrastructure is generally paid for by metered user fees. Major investment projects are generally financed by the issuance of long-term bonds.

Infrastructure inadequacies in both rural and urban areas are a major factor constraining India’s growth. India needs a lot more infrastructure to meet its needs. The government is focusing on this and has created a set of programs and reforms aimed at addressing this issue.