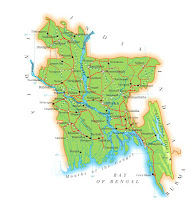 The People’s Republic of Bangladesh, with an area of 147570 sq. km. and a population of 16.2 crores (2009) is encircled from three sides (north, west, and east) by India. The common border between India and Bangladesh is 4000 km out of which wire fencing has been undertaken in 3300 km long boundary line. In its south border lies the Bay of Bengal and it shares the south-east boundary with Myanmar.
Bangladesh, earlier called East Pakistan, was separated from Pakistan and became independent in 1971 after 9 months long liberation war in which India played a major part. In 1972 its founder leader Mujib-ur-Rehman signed The treaty of friendship and peace with India which was assumed to be the corner-stone of Indo-Bangladesh relations.
Mujib-ur-Rehman is called the father of Bangladesh. He was killed in a military coup in 1975 and was succeeded by Military Ruler Zia-ur-Rehman, who was also killed in 1981 and H.M. Ershad became the President of Bangladesh. Democracy was restored in Bangladesh in 1991. Thus from 1975 to 1991, Bangladesh was under military rule.
At present, there are three national parties in Bangladesh. First Awami League led by Sheikh Hasina Wajed, the daughter of Mujib-ur-Rehman. Second Bangladesh Nationalist Party (BNP) led by Khaleda Zia, the widow of Zia-ur-Rehman, who was killed in 1981. The third party of the smaller following is Jatiya Party led by H.M. Ershad, who presently supports the Awami League Government in Bangladesh.
Read Also: India & Bangladesh Relations
After the restoration of multiparty democracy and adoption of the parliamentary form of government in 1991, Bangladesh Nationalist Party gained power in 1991 election. However, Awami League came to power in 1996 election. In the parliamentary election of 2001, BNP again wrested political power from Awami League. The next election was scheduled in Jan-2007, was postponed indefinitely following the widespread protest and a caretaker government was appointed to administer the new general election. During this period, the country suffered from extensive corruption, disorder and political violence. The emergency was declared in Jan-2007 and the army-backed caretaker government of Fakruddin Ahmed aimed to prepare new voter list and the crackdown on corruption. The next election was held in Dec 2008, and Awami League secured 2/3 majority as it won 230 seats out of total 300 seats in parliament.
Both Indo-Bangladesh relation and foreign policy of Bangladesh in general, are deeply influenced by the domestic politics of that country. The Awami League Party is known for its democratic and secular credential and follows a policy of friendly relations with India. Whereas BNP dominated by fundamentalist and conservative element, is known for its anti-India stance. It accuses India of following hegemonistic policy with small neighbours.
The BNP government has been instrumental in developing warm ties with China, particularly in the last decade. Between 2006 and 07, trade between China and Bangladesh rose by 28.5% and there have been agreements between the two countries to grant various Bangladesh commodities tariff-free access to Chinese market. Cooperation the military of Bangladesh and Chinese army is also increasing with joint military agreements signed between the two countries. China’s growing influence on Bangladesh is the cause of worry for India.
The most contentious between India and Bangladesh have been the sharing of Ganga water, repatriation of Chakma refugees, transfer of Teen Bigha corridor to Bangladesh , safe sanctuaries in Bangladesh for insurgent groups of Assam-other north-eastern Indian state, transit facility to India through Bangladesh to ensure supply to north-eastern parts of India and more recently activities of Bangladesh-based terrorist groups particularly Harkat-ul-Jihadal-Islam (HUJI).
The problem of Ganga water sharing arose in 1975 when India constructed Farakka Dam on the Ganga River to increase the supply of water for maintaining navigability of Hoogly river. With many ups and downs, the two countries signed Ganga Water Sharing Agreement in 1996, which would guide the water sharing between the two countries for next 30 years. However, the sharing of water of other tributaries of Ganga between the two countries still remains.
Also, Read: 7 Concerns in India-Bangladesh Relations
The Teen Bigha corridor is the  small of Indian Territory which joins Bangladeshi enclave of Dahagram and Angorpota. Agreements for the use of this corridor by Bangladesh were signed in 1972 and 1982. Following the Indian Supreme Court judgment, the Teen Bigha corridor was given to Bangladesh on perpetual lease, without any rent in 1992. However, this perpetual lease provided for the retention of Indian sovereignty over Teen Bigha with free movement of Indian Citizens living one either side of the corridor.
Both countries signed Chakma Hill track agreement in 1997 which pave the way for the repatriation of more than 15,000 Chakma refugees living in Tripura. The repatriation of these refugees is almost complete. To check the further infiltration of Bangladeshi refugees, the government of India has decided to put barbed wire fencing along the 3300 km border between the two countries. Bangladesh resents the fencing of the border. As a goodwill gesture, Kolkata-Dhaka bus service was also initiated in 1999. More recently Bangladesh has handed over some India insurgent leaders, notably Arbind Raj Khova, the chief of ULFA to India in Dec 2009. It should be noted that insurgent groups find safe heaven in Bangladesh and carry out their anti-India activities from Bangladesh territory.
Bangladesh is a member of Commonwealth of Nation, SAARC, BIMSTEC, and the D-8 Group of countries. As per the World Bank Report of 2005 Bangladesh has made significant progress in human development, illiteracy, gender parity etc.
Must Read:
India, Bangladesh Ink Extradition Pact
Important Summits