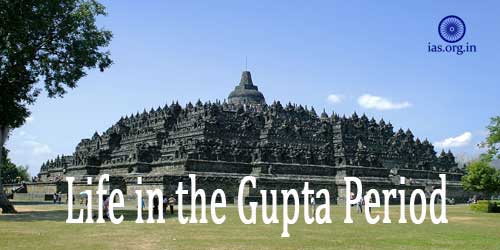 During the life in the Gupta Period, the King was the head of the administration. With the help of his ministers the King had to rule following the set principles of Rajya Dharma.

The Gupta Empire, following the traditional system of administration, was separated into Bhuktis, Vishayas and Gramas. Large parts of the empire was administered by internally autonomous fuedatories.

Prevelent was the practice of land grants and the King bequeathed fiscal and administrative concessions to priests. According to the system of Varna the society was divided due to which the brahmanas had established and further cemented their supremacy in society.

However, the traditional four fold caste system had stretched to include foreign elements such as Hunas as well to provide a place to tribal / backward people who, after getting land grants of Guptas, had become a significant part of the society. Due to prevalence of untouchability, the Chandalas had to live outside the city boundaries. Status of women also declined.

Must Read: Significance of the Harappan Civilization

Economic Life in the Gupta Period

The members of these above mentioned professions were organized into Guilds (Sreni) that were corporate bodies set up by members of a particular trade to perform important economic functions.

In the life in the Gupta Period these Guilds acquired more autonomy and started to perform even judicial and executive functions concerning their members. Not only this, the guilds also started to maintain their own militia termed Srenibala.

It were the lawmakers, it seems, who had sanctioned the autonomous character of the guilds. It can be confirmed this fact that while the earlier texts ask the king to respect the Srenidharma, the texts belonging to the life in the Gupta period reveal that the king was bound to accept the decision of the guilds.

The paucity of coin, during the life in the Gupta Period, of common and everyday usage indicates that money economy was getting weaker. There are ample evidences that Guptas issued a large number of gold coins, but these could not be used for daily trade transactions. According to Fa Hsien, the Chinese pilgrim who visited India during the reign of Chandragupta II, cowrles were the common medium of exchange.

The most significant characteristic of the economic life in the Gupta Period was the decline of the trade that is evident from the decay of urban centres: archaeological diggings at place like Mathura and Sanghol display that the Kushan layers belonging to the 1st and 2nd centuries AD are very flourishing, while Gupta layers belonging to the 4th, 5th and 6th centuries are in a state of decline.

Due to the practice of land grants, that caused transformations in the economic structure of society, there emerged a class of priestly landlords who had control over not only land but also its inhabitants. Land charters belonging to the 6th century clearly display the transfer of peasants along with the soil to the beneficiaries,.

Social Life in the Gupta Period

During the social life in the Gupta Period of general people was affected by the marked revival of brahmanism. Resultedly, the caste-based four-fold division of society was given greater emphasis and efforts were made to cement the supremacy of the brahmanas.

In the similar fashion, land grants during the life in the Gupta Period caused many backwards and tribal people to enter the social fold. In such cases, while the tribal chiefs were granted a respectable position.

During the life in the Gupta Period the position the position of women declined: they were denied formal education and they were married off very early. Womenly activities were restricted to households duties. Women, however, were allowed to listen to the Epics and the Puranas. Women were not given any right to property expect for Stridhana. Stridhana consisted of the garments and jewellery gifted to a women at the time of her marriage. In this context, it is important to mention here that social evils such as Sati and Child Marriage are a product of the Gupta Period.

As far as the social life in general is concerned, the upper classes, during the life in the Gupta period lived a comfortable life. Literary and musical gatherings were held. Sports like hunting, bull – fighting were common. Playing chess and dice too was common.

Religious Life in the Gupta Period

The most distinguished characteristic of the religious life during the life in the Gupta Period was the transformation of ancient brahmanical faith into modern Hinduism.

Brahmanism had come to the forefront as Buddhism longer received royal patronage in the life in the Gupta Period. The Bhagvata Sect of Hinduism was provided protection by the Guptas rulers. The members of the Bhagwata Sect called themselves Bhagvatas, worshipped gods Vishnu, and Shiva, performed Ashwamedha sacrifices, gave large donataions to brahmanas and built many temples.

Final Compilation of Puranas was done during the life in the Gupta Period. Vishnu came to be represented as savoiur of Varna system and emerged as the god of devotion. Around Vishnu, numerous legends gathered and a whole Purana called Vishnu Purana was compiled in his honour. A law book Vishnusmriti was also named after him.

To champion all these by the 4th century AD there came into existence a famous Vaishnava work Bhagvad Gita that taught devotion of Lord Krishna.

A few Gupta Kings were worshippers of Shiva, the lord of destruction. However, the theory of Ten Avatars of the Supreme God Vishnu was accepted and among them Krishna Was accepted as the most important.

According to the Hsien the people during the life in the Gupta Period were generally happy. They practiced Ahinsa and were vegetarians. They were educated and kind. Rich Vaisyas were always ready for dispensing charity and medicines. However, society was divided as per the Varna System and untouchability has begun.

The Gupta rulers were not despots. They did not impose any restrictions on the movements of their subjects. The criminal law was not harsh and there was no capital punishment. Offenders were fined/punished according to their crime. The people in general were honest and even a lonely pilgrim like him felt safe from rubbers while travelling through the life in the Gupta Period.