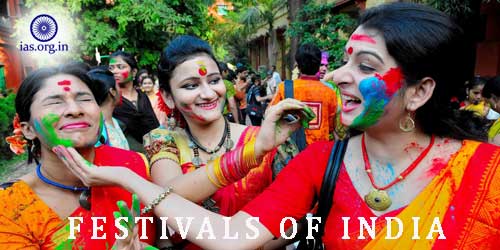 The word ‘Festival’ has its origin in the Latin word ‘Festivus’ meaning merry or happy. Festivals, true to their meaning, are a time for social exhilaration and fun, as they are equivalent to singing, dancing, feasting, carnivals and athletic events. Festivals, as they offer a sense of belonging to religious, social or geographic groups, fulfill specific social requirements and responsibilities, and along with this they cater entertainment too!

Though there are various kinds of festival, modern festivals focus on cultural activities, that often provide an opportunity for bonding and developing unity among families and friends. Though many festivals have their origin in religious, other are based on seasonal change or have some national or cultural importance.

Must Read: Events and Festivals in Puri

Some of the most popular and significant festivals celebrated in our country include:

Every year in the month of March (mostly early but sometimes in the latter half of the month) on the day after the full moon Holi is celebrated. It is celebrated at a time when the crops have been harvested, showing the nature of Holi as a festival symbolizing change of season, and naturally it is a time for fun.

The festival of Holi, one  of the most popular festivals that exhibits the cultural roots of our society, starts right away on the previous night, the full moon night, of the celebration day of the festival, when streets become crowded, not in the sense of chaos, with people visiting relatives and friends, splashing coloured water on each other.

The story behind the celebration of Holi, traditionally, goes like this: There was a very arrogant and headstrong King Hirankashyap who fancied himself being mightier than God Himself. His was such  strong a fancy about himself that he started to hate his own son Prahlada when he came to know that his son wroshipped Lord Vishnu.

Hirankashyap’s sister Holika, persuaded by the king himself, was sent to burn Prahlada to death; however, with the grace of God, reverse happened and Holika died in her own fire and Prahlad emerged unscathed. The huge bonfires burnt on the eve of Holi on the full moon night symbolize the destruction of wickedness of Holika from which the festival got its name.

Dussehra or Durga Puja, the ten day celebration that involves the worship of Goddess Durga, a form of Shakti, and the tenth day celebration of Vijaya Dashmi, is celebrated in various parts of India in different ways cementing the idea of unity in diversity.

In Tamil Nadu, Andhra Pradesh and Karnataka on this occasion families, to express their joy, decorate their homes with ranges of dolls arranged systematically and of course artistically too, and women, among families and friends, exchange gifts of sweets, coconuts and even clothes.

In Kerala at this auspicious day of Vijaya Dashmi, as it is popularly addressed there, little children mark their entry into the World of letters as they are initiated into the first letters of alphabet.

Dussehra, as it is popularly called in the North India, is celebrated as an occasion of Lord Rama’s victory over the infamous, cruel and headstrong king Ravana who had kidnapped his wife Sita. On the tenth day an elaborate procession lead to a ground, everywhere it is known as Ramlila ground, where effigies of Ravana, and his equally infamous brothers are burnt with a grand fanfare in which State also registers its presence that strengthens the idea of a culturally strong society and therefore country.

In the context of Durga Puja, Gujarat, where it is popularly termed Navaratri, is famous for its Garba dances, there are arranged every evening, throughout the Navaratri, around an earthern lamp in which people from all sections of society take part with joyous abandon. An enchanting atmosphere is created by the clourful dresses of women, the rthythmic music matching, often competing, with the sparkling lights, as everybody enjoys, twirling and whirling late into night.

The festival of Diwali, originated from the Sanskrit word Deepavali meaning a row of lamps (Diya), is celebrated almost all over India on a new moon night, indicating its link  to the change of season, in October or November; however, different regions have different reasons, showing diversity and Unity at the same time, for celebrating the festival.

Diwali, in Gujarat, is a five day celebration, in which on the first day, that is immensely popular as Dhanteras in almost all of North India, is the day to buy new cloths, utensils, ornaments, etc. On the second day the victory of Lord Krishna over the demon Naraka is celebrated and everyone takes an oil bath that is the highlight of the second day of the festival. The third is entirely devoted to the worship of Goddess of wealth, reverently called ‘Ma Lakshmi’. On the fourth day Govardhana Mountain is worshipped; and finally on the fifth day Bhaiyadooj in which sisters invite brothers and their families for lunch and expresses their love and boundless affection for their brothers and in return brother gives their sister gifts and assure the same bondage on their part. All the festivals come in cularfestival. Diwali in North India, also celebrated at some places to commemorate the return of Lord Rama to Ayodhya after his exile of fourteen years.

In South India Diwali is celebrated to mark the victory of Lord Krishna over demon Naraka. In Bengal on this moon night the Goddess Kali is worshipped and so it is popularly celebrated as Kali Puja.

However, be it anywhere, North, South, East or West of India, Diwali, basically a family festival, a festival by the brilliant glow of sparking fireworks and rows of twinkling Diyas. It is a time for relatives and friends of families to meet, get together, and exchange gifts and sweets.

During Pongal festival, in Tamil Nadu generally in the middle of the month of January, the whole state plunges in a festival mood. Pongal is a harvest festival, indicating its link to the change of season, one of the major characteristics of the Indian festivals, that falls in January and lasts for three days.

In many States, particularly the Northern part of the country, Pongal is celebrated as Makar Sankranti, obtaining a place in the list of national festivals, to mark the beginning of the Sun’s northeway journey.

The first day of the this three day festival, Pongal, is celebrated as Bhogi Pongal that is celebrated in honour of the Supreme Ruler of the clouds, Lord Indra, that provide us rain.

The second day, known as Surya Pongal, is dedicated to the worship of the Sun God. A special dish, also called Pongal, is prepared on this day. The third and the final day is called Mattu Pongal that indicates to ‘festival honouring cattle’. To mark the ceremony, cattle are washed and their horns are painted and decorated with shing metal caps. This day is celebrated with full of fun and revelry.

NOTE: Watch out for the second part of this Article; don’t miss.