My account
Get into your account.
LoginRegister
Plans
Home Learn Culture Art and Literature of Middle Ages 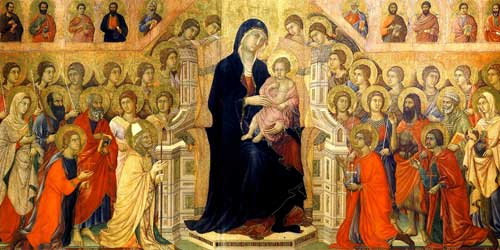 Art during the Middle Ages was different based on the location in Europe as well as the period of time. However, in general, Middle Age art can be divided up into three main periods and styles: Byzantine Art, Romanesque Art, and Gothic Art. Much of the art in Europe during the Middle Ages was religious art with Catholic subjects and themes. The different types of art included painting, sculpture, metal work, engraving, stained glass windows, and manuscripts.

The end of the Middle Ages is often signaled by a great change in art with the start of the Renaissance Period.

Must Read: Mural Paintings – Art on wall and ceilings

The start of the Middle Ages is often called the Dark Ages. This is the period of time from 500 to 1000 AD. The main form of art during that time was Byzantine art produced by artists from the Eastern Roman Empire, also called Byzantium.

Byzantine art was characterized by its lack of realism. The artists did not try to make their paintings realistic but focused on the symbolism of their art. Paintings were flat with no shadows and the subjects were generally very serious and somber. The subjects of the paintings were almost entirely religious with many paintings being of Christ and the Virgin Mary.

The period of Romanesque Art started around 1000 AD and lasted to around 1300 with the beginning of the Gothic Art period. Art prior to that is called pre-Romanesque. Romanesque art was influenced by both the Romans and Byzantine Art. Its focus was on religion and Christianity. It included architectural details like stained glass art, large murals on walls and domed ceilings, and carvings on buildings and columns. It also included illuminated manuscript art and sculpture.

Gothic art grew out of Romanesque art. Gothic artists began to use brighter colors, dimensions and perspective and moved toward more realism. They also began to use more shadows and light in their art and tried out new subject matters beyond just religion including animals in mythic scenes.

Artists of the Middle Ages

You May Also Read: Development of Mughal Painting

The majority of the literature produced during the Middle Ages was written by religious clerics and monks. Few other people knew how to read and write. Much of what they wrote was hymns, or songs, about God. Some also wrote philosophical documents about religion. One of the most popular books of the Middle Ages was the Golden Legend, by an archbishop of Genoa Jacobus de Voragine. It told stories about the lives of the Saints during Medieval times. Some secular, meaning non-religious, books were written as well.

Here a few of the more famous literary works from the Middle Ages: