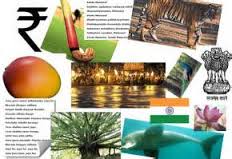 The Republic of India has several official national symbols including a flag, an emblem, an anthem, a calendar as well as several other symbols. The design of the national flag was adopted by the Constituent Assembly just before independence, on July 22, 1947. These symbols are intrinsic to the Indian identity and heritage. Indians of all demographics backgrounds across the world are proud of these National Symbols as they infuse a sense of pride and patriotism in every Indian’s heart.

The National Flag is a horizontal tricolour of deep saffron (kesaria) at the top, white in the middle and dark green at the bottom in equal proportion. The ratio of the width of the flag to its length is two to three. In the centre of the white band is a navy-blue wheel which represents the chakra.

The top saffron colour indicates the strength and courage of the country. The white middle band indicates peace and truth with Dharma Chakra. The green shows the fertility, growth and auspiciousness of the land.

Jana Gana Mana is the national anthem of India. Written in Bengali, it is the first of five stanzas of a Brahmo hymn composed and scored by Nobel laureate Rabindranath Tagore. It was first sung in Calcutta Session of the Indian National Congress on 27 December 1911.

“Jana Gana Mana” was officially adopted by the Constituent Assembly as the Indian national anthem on 24 January 1950. 27 December 2011 marked the completion of 100 years of Jana Gana Mana since it was sung for the first time. A formal rendition of the national anthem takes fifty-two seconds.

The song Vande Mataram, composed in Sanskrit by Bankimchandra Chatterji, was a source of inspiration to the people in their struggle for freedom. It has an equal status with Jana-Gana-mana. On January 24, 1950, the President, Dr Rajendra Prasad came up with a statement in the Constituent Assembly, “the song Vande Mataram, which has played a historic part in the struggle for Indian freedom, shall be honoured equally with Jana Gana Mana and shall have equal status with it.”

The first political occasion when it was sung was the 1896 session of the Indian National Congress. The song was a part of Bankimchandra’s most famous novel Anand Math (1882).

The emblem of India is an adaptation of the Sarnath Lion Capital of Ashoka.It was adopted as the National Emblem of India on 26 January 1950, the day that India became a republic. The emblem forms a part of the official letterhead of the Government of India and appears on all Indian currency as well. It also sometimes functions as the national emblem of India in many places and appears prominently on the diplomatic and national Passport of the Republic of India.

The wheel “Ashoka Chakra” from its base has been placed onto the centre of the National Flag of India. The state emblem is an adaptation from the Sarnath Lion Capital of Ashoka.

Satyameva Jayate is a Hindu mantra from the ancient scripture Mundaka Upanishad. Upon the independence of India, it was adopted as the national motto of India. It is inscribed in Devanagari script at the base of the national emblem. The emblem and words ‘Satyameva Jayate’ are inscribed on one side of all Indian currency. The emblem is an adaptation of the Lion Capital of Asoka which was erected around 250 BCE at Sarnath, near Varanasi in the north Indian state of Uttar Pradesh, but does not contain the motto.

The Indian national calendar (sometimes called Saka calendar) is the official civil calendar in use in India. It is used, alongside the Gregorian calendar, by The Gazette of India, news broadcasts by All India Radio, and calendars and communications issued by the Government of India. The term may also ambiguously refer to the Hindu calendar, and the Saka era is commonly used by different calendars as well.

The calendar was introduced by the Calendar Reform Committee in 1957.  Local variations based on older sources such as the Surya Siddhanta may still exist. Usage officially started at Chaitra 1, 1879 Saka Era, or March 22, 1957.

Neither the Constitution of India nor Indian law specifies a National language. India specifies Hindi and English as official languages of the India de jure. Article 343 of the constitution specifies that the official language of the India is Hindi in Devanagari script. Article 354 states that a state of India may officially adopt one or more languages in use in the state or Hindi/English as the language or languages to be used for all or any of the official purposes of that state.

Lotus (Nelumbo Nucipera Gaertn) is the National Flower of India. It is a sacred flower and occupies a unique position in the art and mythology of ancient India and has been an auspicious symbol of Indian culture since time immemorial. India is rich in flora. Currently available data place India in the tenth position in the world and fourth in Asia in plant diversity.

Mango is the national fruit of India, Philippines and Pakistan. It finds mention in the songs of the 4th century CE Sanskrit poet, Kalidasa, prior to it is believed to have been tasted by Alexander (3rd century BCE) and Chinese pilgrim, Hieun Tsang (7th century CE).

Mango blossoms are also used in the worship of the goddess Saraswati. Mango leaves are used to decorate archways and doors in Indian houses and during weddings and celebrations like Ganesh Chaturthi.

The Indian peacock, Pavo cristatus, the National Bird of India, is a colourful, swan-sized bird, with a fan-shaped crest of feathers, a white patch under the eye and a long, slender neck. The male of the species is more colourful than the female, with a glistening blue breast and neck and a spectacular bronze-green tail of around 200 elongated feathers. Peacock has been used in numerous iconic representations, including being designated the national bird of India in 1963.

The magnificent tiger, Panthera tigris is a striped animal. It has a thick yellow coat of fur with dark stripes. The combination of grace, strength, agility and enormous power has earned the tiger its pride of place as the national animal of India. The Bengal tiger has been a national symbol of India since about the 25th century BCE when it was displayed on the Pashupati seal of the Indus Valley Civilisation.

Ganges River Dolphin is the National Aquatic Animal of India. This animal was given this title as it represents the purity of the Ganges as this mammal only survives in pure and fresh water. They are locally known as susu, due to the sound which is made while breathing. It is critically endangered in India and has been included in the Schedule I the for the Wildlife (Protection) Act, 1972.

The Asian elephant is the National Heritage Animal of India. This status was given to this animal due to the decline in its poplulation. The Environment and Forest Ministry recommended to give this title to this species and the Elephant Task Force was approved by the standing committee of National Board of Wildlife on October 13, 2010.

In November 2008, the Ganges, alone among India’s rivers, was declared a “National River”, facilitating the formation of a Ganga River Basin Authority that would have greater powers to plan, implement and monitor measures aimed at protecting the river.

The Ganges or Ganga is a trans-boundary river of India and Bangladesh.  The Ganges is the most sacred river to Hindus and is also a lifeline to millions of Indians who live along its course and depend on it for their daily needs. It is worshipped as the goddess Ganga in Hinduism.