Beginning of Naxalism in India: The exploitation of poor people, depressed classes and tribal people by superior classes has been the situation in India from the earlier periods till now. When this exploitation reaches a saturation level, a revolution will automatically rise from the victims and sometimes it takes a form of a movement questioning the entire system itself. A good example for this is the NAXAL MOVEMENT in India.

The NAXAL MOVEMENT (derived its name from a village in West Bengal called NAXALBARI) shortly called as NAXALISM is a radical communist movement where the social masses strongly believe that the solution for the social wrongs happening is to overthrow the existing political system completely. The NAXALITE MOVEMENT in India initially began in West Bengal (in a village called NAXALBARI) and later spread to the rural areas of Chhattisgarh, Bihar, Orissa, Telangana and Andhra Pradesh. 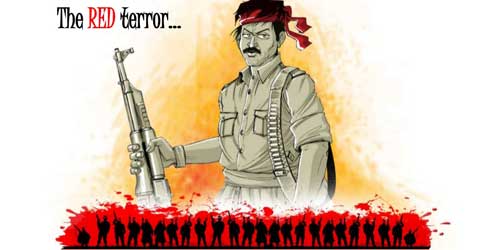 The movement of NAXALISM in India has its seeds in the Russian revolution which was based on MARXISM and SOCIALISM that is all the resources of the state should be equally distributed among all the sections of people. This concept was inherited by MAO ZEDONG of COMMUNIST PARTY of China including revolutionary and radical dimensions to it. This was popularly known as MAOISM.

The COMMUNIST PARTY OF INDIA (CPI), taking inspiration from MAOISM followed the method of armed rebellion (MAOISTS) to counter the British forces during the freedom struggle with West Bengal as the centre and later on spread to other states as well.

TEBHAGA MOVEMENTwas the first Maoist movement started in West Bengal in 1946 during which the poor peasants turned against their landlords, who were acquiring a maximum share in the harvest and oppressing the peasants. This movement turned violent as the farmers started an armed fight against the landlords.

TELANGANA MOVEMENTwhich was led by the people of Telangana in the period of 1946-51 against the atrocities of the NIZAM rule also acquired radical dimensions as it progressed.

The pre-independence Maoist movements are mostly inspired by the Indian freedom struggle whereas after independence the poor socio-economic conditions and the exploitation of the resources available to the locals (such as destruction of forests in tribal areas)are the main causes of the NAXAL movements.

NAXALBARI MOVEMENT IN 1967was the landmark movement in the history of NAXALISM. On 3rd March 1967, in a village called NAXALBARI in West Bengal, police opened fire on the farmers who were protesting against the agricultural laws and many farmers were died. Then the uprising started against the government which was led by CHARU MAZUMDAR of CPI. The armed rebellions killed many police officials and the movement got National attention.

Many uprisings started with the inspiration of the NAXALBARI movement in Bihar, Uttar Pradesh, Telangana, tribal areas of Srikakulam in Andhra Pradesh and Mahendragiri forest region in Orissa. The most subdued and socially marginalised people and tribal people mostly participated in these uprisings against the government and these areas are still the NAXAL affected ones.

ACTIONS TAKEN BY THE GOVERNMENT:

The government in retaliation to the NAXAL movements, created SALWAJUDUM military campaign, Operation GREEN HUNT in Naxal-affected areas. As of now the CRPF (CENTRAL RESERVE POLICE FORCE) are in charge to these anti-Naxal operations.

Mostly these movements gather the support of the people due to their ignorance and backwardness. Hence, Government started organising awareness camps and giving employment to the people, setting up ANGANWADI centres for their health care and so on.

However, this is an on-going problem in our country and more steps are to be taken in a more organised manner to reduce the grievances.