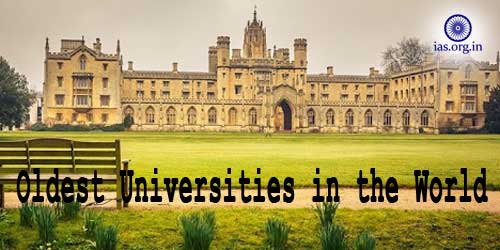 The word ‘university’ is derived from the Latin word universitas magistrorum et scholarium, which approximately means “community of teachers and scholars”. The term was coined by the Italian University of Bologna, which, with a traditional founding date of 1088, is considered to be the first university.

The following is the list of ten oldest universities in the world that shows their brief histories:

University of Bologna, the oldest university in the world, was founded as far back as 1088. The Word ‘University’ was actually derived from its foundation. It received, in 1158, from Emperor Frederick I Barbarossa, the “Authentica habita”, which settled the rules, rights and privileges of universities. It is located in Italy with about 100,000 students in its 23 schools.

The University of Salamanca was believed to have been founded in 1134 and it received its royal charter of foundation as “Estudio General” in 1218, and is the third oldest university in continuous operation in Europe. It was the first European university to receive the title of “University” as such, which was granted by the King of Castile and León, Alfonso X, and the Pope in 1254.

The University of Padua was initially founded as a school of law in 1222 by a group of professors and scholars from the University of Bologna. It’s curricular quickly expanded and was eventually divided into three distinct universities. In 1545, the Università di Padova established the Botanical Garden of Padova, now one of the oldest academic gardens in the world. It also runs nine museums.

The University of Siena (Originally called Studium Senese), Italy was founded in 1240 by Commune of Siena and is located in Siena, Tuscany. It closed temporarily in 1808–1815 when Napoleonic forces occupied Tuscany. On November 7, 2015 the University celebrated its 775th anniversary.

This university, located in Egypt, is the world’s oldest surviving degree-granting institute. Founded in 970-972, this university serves as a center for Arabic literature and Sunni Islamic learning. Al-Azhar university concentrates upon a religious syllabus, which pays special attention to the Quranic sciences and traditions of the Prophet Muhammad on the one hand, while also teaching all modern fields of science.

The University of Valladolid is the 10th oldest university in the world having been established in 1241 in Valladolid Castile-Leon, Spain. The university still functions today and has over 31000 students and 2000 teachers. One hypothesis is that its foundation is the result of the transfer of Palencia General Survey between 1208 and 1241 by Alfonso VIII, king of Castile, and Bishop Tello Téllez de Meneses.