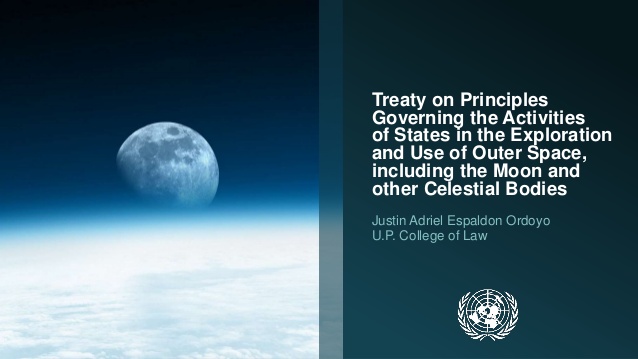 Outer Space Treaty is a legally binding international treaty that regulates the use of space for peaceful use only. This treaty was signed in 1967, was agreed through the UN, was the first treaty of its kind to be signed and today it remains as the ‘constitution’ of outer space. It has been signed and made official, or has been ratified, by 105 countries across the world.

Though the treaty is technically binding, in the absence of Space Police, it can be practically enforced.So a country can easily bypass the treaty but there are implications for not complying like sanctions, lack of legitimacy and respect which is of importance in the international arena. But in spite of its continued existence since 50 years, it has never been violated.

Features of the Treaty

1.Outer space can be used for “peaceful purposes” – weapons of mass destruction cannot be used in space.

In spite of few challenges, the treaty has done its job especially during the cold war era when it was incepted so that to avoid any conflict in space between the two super power i,e, USA  and USSR.However Art.iv of the treaty need some update but  50 years down the line of its inception at the time increasing space exploration, global interconnectedness, it is time to revisit the treaty and equip it to deal with the unique challenges posed by the interconnected postmodern globalised world we live in.

You May Also Like to Read:     Milestones in Space Exploration