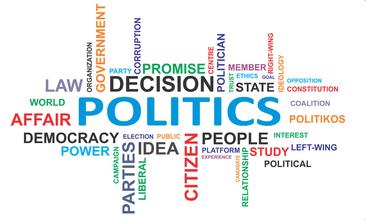 Politics in India takes place within the framework of a constitution. India is a federal  parliamentary democratic republic in which the President of India is head of state and the Prime Minister of India is the head of government. India follows the dual polity, i.e. the double government which consists of the union at the centre and states at the periphery. The constitution defines the organisation, powers and limitations of both central and state governments, it is written, rigid and supreme.

There is provision for a bicameral legislature consisting of an Upper House, i.e. Rajya Sabha, which represent the states of the Indian federation and a lower house i.e. Lok Sabha that represents the people of India as a whole. Indian constitution provides for an independent Judiciary headed by the Supreme Court to adhere and protect the constitution and to settle disputes between the centre and the states or between the states, it can also nullify any central or state laws if they are against the constitution.

India had its first general election in 1951, which was dominated by Indian National Congress, and went on to dominate the successive elections, up till 1977, when the first non-Congress government was formed for the first time in independent India. The 1990s saw the end of Single Party domination and rise of Coalition Governments. The elections for 16th Lok Sabha held in April and May 2014 once again brought back single-party rule in the country, that of the Bharatiya Janata Party.

There are two types of political parties in India – National Party and Regional/State party. Every political party must bear a symbol and must be registered with the Election Commission of India.

In the current amendment to the Symbols Order, the Commission has infused the following five principles, which, in its view, should govern the polity in the country, situate as it is in its present state:

Legislative presence is a must for recognition as a National or State party.

There are three alliances on a national level in India.

The Act aims to provide 3-tier system of Panchayati Raj for all States having population of over 2 million, to hold Panchayat elections regularly every 5 years, to provide reservation of seats for Scheduled Castes, Scheduled Tribes and Women, to appoint State Finance Commission to make recommendations as regards the financial powers of the Panchayats and to constitute District Planning Committee to prepare draft development plan for the district.

Economic issues like poverty, unemployment, development are main issues that influence politics. Garibi hatao (eradicate poverty) has been a slogan of the Indian National Congress for a long time. The well known Bharatiya Janata Party encourages a free market economy. The Communist Party of India (Marxist) vehemently supports left-wing politics like land-for-all, right to work and strongly opposes neo-liberal policies such as globalization, capitalism,  and  privatization.

Terrorism, Naxalism, religious violence and caste-related violence are important issues that affect the political environment of the Indian nation. Terrorism had affected politics India since its conception, be it the terrorism supported from Pakistan. In 1991 the former prime minister Rajiv Gandhi was assassinated during an election campaign. The suicide bomber was later linked to the Sri Lankan terrorist group Liberation Tigers of Tamil Eelam.

The Babri Masjid demolition on December 6, 1992 by Hindu Karsevaks resulted in nation-wide communal riots in two months, with worst occurring in Mumbai with at least 900 dead. The riots were followed by 1993 Mumbai Bomb Blasts, which resulted in more deaths.

Law and order issues, such as action against organised crime are issues which do not affect the outcomes of elections. On the other hand, there is a criminal–politician nexus. Many elected legislators have criminal cases against them.

Schedules in The Constitution of India