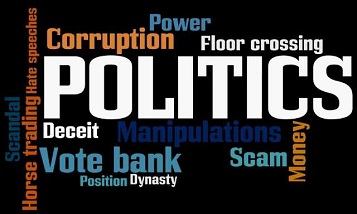 Politics in India takes place within the framework of a constitution. India is a federal parliamentary democratic republic in which the President of India is head of state and the Prime Minister of India is the head of government. The constitution defines the organisation, powers and limitations of both central and state governments.

There is provision for a bicameral legislature consisting of an Upper House, i.e. Rajya Sabha, which represent the states of the Indian federation and a lower house i.e. Lok Sabha that represents the people of India as a whole. Indian constitution provides for an independent Judiciary headed by the Supreme Court to adhere and protect the constitution and to settle disputes between the centre and the states or between the states, it can also nullify any central or state laws if they are against the constitution.

In India, elections are held according to The Representation of People Act, 1951. This Act was enacted before first General Election by the provisional parliament under Article 327 of Indian Constitution. The Act includes provisions for election of both the houses of parliament and state legislatures. It also has provisions for offenses and corrupt practices related to elections. Procedure for resolution of disputes or doubts in election result is also mentioned in the Representation of People Act.

The governments, union or state, are formed through elections held every five years (unless otherwise specified), by having the majority of members in their respective lower houses (Lok Sabha in the centre and Vidhan Sabha in states). India had its first general election in 1951, which was dominated by Indian National Congress, and went on to dominate the successive elections, up till 1977, when the first non-Congress government was formed for the first time in independent India. The 1990s saw the end of Single Party domination and rise of Coalition Governments. The elections for 16th Lok Sabha were held in April and May 2014.

One feature of the political parties in India is that the parties are generally woven around their leaders, the leaders actively playing a dominant role, the role of leadership can be transferred and tends to take dynastic route.

India has a multi-party system, where there are a number of national as well as regional parties. A regional party may gain a majority and rule a particular state. If a party is represented in more than 4 states, it would be labelled a national party. Out of the 66 years of India’s independence, India has been ruled by the Indian National Congress (INC) for 53 of those years.

A registered party large political parties which were earlier recognised as a National Party before 2014 elections. They are:

However in recent Lok Sabha Elections (2014) most of the parties from the aforesaid list have lost their National Party title and only two parties Bhartiya Janta Party (BJP) and Indian National Congress (INC) are now National Parties of India. The status of National Party has not been revoked from CPI because of its early foundation.

These status are given and revoked by the Election Commission in light of the provision of the Representation of People Act.

Signing NPT not a prerequisite for Nuclear Suppliers Group