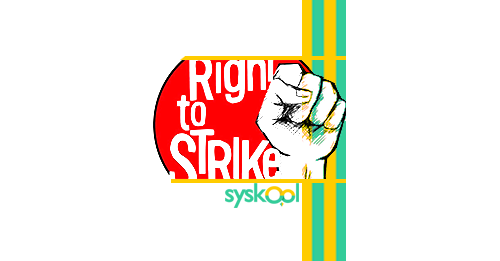 The Supreme Court of India in its judgment in the case of T.K. Rangarajan Vs. Government of Tamil Nadu and Others (the case of the dismissal of over 170,000 striking Tamil Nadu Government employees and teachers) ruled on August 7, 2003 that the government employees do not have either a Fundamental or Statutory or equitable, moral right to strike, whatever the cause, just or unjust.

The Division Bench of Supreme Court comprises of Justice M.B. Shah and Justice A.R. Lakshmanan observed that apart from statutory rights. Government employees cannot claim that they can take society at ransom by going on strike.

The Supreme Court in 1961 in the case of Kameshwar Prasad Vs. State of Bihar had held that even a very liberal interpretation of Article 19(l)(C) of the Indian Constitution could not bad to the conclusion that the trade unions have a guaranteed Fundamental Right to strike.

In stating that the Government employees have no legal, moral or equitable right to strike the Court has evolved a new industrial jurisprudence unthought of earlier.

Though earlier decisions of the courts have rejected the right to strike as a Fundamental Right but not as a legal, moral or equitable right.

The question of strike not being a statutory right or legal right has never been considered in the court.

The decision of Rangarajan Case has ignored the statutory provisions in the Industrial Disputes Act, 1947 and the Trade Unions Act, 1926, and an equal number of case laws laid down by larger benches that have recognised the right to strike.

It also fails to consider International Covenants that pave the way for this right as a basic tenet of international labour standards.

In Kameshwar Prasad’s Case, the apex court had settled that the right to strike is not a Fundamental Right.

But time and again the court has also settled that the right to strike is a legal right, one that is recognised by most democratic countries of the world.

The Supreme Court evidently carried away by the fact that nearly two lakh government employees went on strike in the instant case and the Government machinery came to a standstill, also 90% of the state revenue of the state is spent on salaries of the government servants.