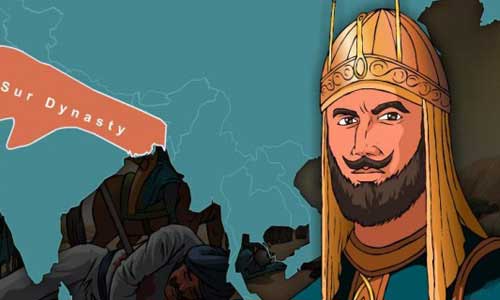 It was Sher Shah Suri (also known as Sher Shah Sur) who founded Sur dynasty in Hindustan. This dynasty was founded during the years in which the reign of Humayun was broken and it took Humayun 15 years to re-establish his empire in India.

This interlude of fifteen years of the reign of Humayun is important mainly for two reasons. First, it was the last time that an Afghan Dynasty captured the throne of Delhi and ruled over North India from this capital town. And second, the dynasty reinvigorated and reformed the old administrative system in the country and catered her prosperity, order and peace.

Sher Shah Suri, originally known as Farid, was a man of humble origin. His grandfather, Ibrahim Sur, was a native of the mountainous region of Roh near Peshawar that is situated at the banks of river Gomal. Ibrahim traded in horses but in his business he could not succeed, so in search of employment he migrated to India during the early years of  Bahlol Lodi’s reign. Ibrahim Sur and his son, Hasan, settled at Bajwara (Hoshiarpur district of Punjab).

It was here (at Bajwara), that Farid was born in 1471 (this date was provided by Bhartendu Harish Chandra and Sayyid Ahmad Khan, both, were renowned writers of 19th century). However, Dr. K.R. Qanungo, a great scholar and an accepted authority on Sher Shah, gives 1486 as Sher Shah’s birth year.

Must Read: The Revenue System under Mughal Administration

Sher Shah Suri: As a Man

Sher Shah, as he was not born in a royal family, had to make his way in life through adversity. Perhaps it is the reason behind the assessment that ‘Sher Shah did not possess the culture and personal charm of a born aristocrat’.

After going through Tarikh-i-Daulat-i-Sher Shahi of Hasan Ali Khan, who was a first rate contemporary Persian authority, one comes to know that Sher Shah in his youth was frivolous and his morals were those of a spoiled young man. He had serious differences with his father who was greatly under influence of Sher Shah’s step mother, so he cannot be described as a dutiful son.

Sher Shah, despite he had a good knowledge of Arabic and Persian and he was fond of history and was well educated, cannot be termed as scholor. He cultivated his study of literature and history for their practical use as for Sher Shah study of them was not an end in itself. He used to read Quran every day, because it was necessary, he believed, for a pious Muhammadan to do so.

Sher Shah can be termed as a patron of learned men in the sense in which other Turk – Afghan Sultans of Delhi were; however, at his court no scholar created any outstanding work of politics, history, economics or even theology, what to say of the sciences. Some modern historians have praised Sher Shah for his patronage of learning without taking pains to find out whether it proved effective in promoting learning and producing work of merit. It is important here to mention that Malik Muhammad Jayasi, a very famous writer who flourished during his time, did not attend his court and was not given any patronage by Sher Shah.

Sher Shah became king (in 1545), he himself remarked that God had granted him sovereignty in the evening of his life, at the ripe age of sixty eight. However, even at that age he exhibited such kind of physical and intellectual activity that could well be an object of imitation for a youth of twenty-five.

Almost all historians have agreed to the fact that Sher Shah used to spend more than sixteen hours a day to the business of the State. He believed in the motto that “It behoves the great to be always active”. Both Abbas Sarwami and Riaz-Ullah Mustaqi, medieval historians, have written that Sher Shah’ had the habit of getting up after two third of the might had passed. After abulation and prayer he would set himself to attend to the business of State: “For four hours he listened to the reading of reports on affairs of the country or on the condition of government establishments. Orders that he gave were reduced to writing, and were issued and acted upon: there was no need for further discussion. Thus he remained busy till the morning (fajar) arrived “(Waqayat-i-Mustaqi in Elliot).

After morning prayer, it was his routine, he would go for an inspection of the army. Then the time of breakfast came. After breakfast, he held the darbar and there till mid-day he openly executed business of the state. His main work at the Darbar was receiving nobles and vassals and envoys from foreign courts. He also scrutinized the revenue obtained from various parganas and verified the accounts of income and expenditure.

Then at noon he sat down for another prayer and retired for rest. He usually spent his evenings in reading Quran and in the company of learned men unless an important work needed his personal attention. There was hardly any change in his routine whether Sher Shah was at his capital or engaged in military campaign.

Must Read: The Mughal Empire

As a ruler the most important feature of Sher Shah’s character was his love of Justice. He famously said, and perhaps used to say, “Justice is the most excellent of religious rites and it is approved alike by the kings of infidels and of the faithful”. He constantly administered even-handed justice as he considered it as his duty to get to the exact truth about the oppressed and the suitors of justice. He never showed any mercy to oppressors even though they might have been his relatives or his nobles.

Sher Shah, following in the footsteps of most of the ancient India’s kings, practiced the liberal policy of helping the poor and the disable. A large amount of money was spent in charity. Sher Shah set a Charity Kitchen’, where whoever came to the court was fed, at the capital on which 500 tolas of gold were expended every day. This charity alone cost the treasury Rs. 18,25,000 per year.

Sher Shah’s devotion to duty, numerous reforms and love of justice have secured for himself a place of eminence in Indian history. No medieval ruler except Akbar the Great had contributed so much for the welfare of the people. Whether assessed as a leader of men or as a builder of institutions or as an administrator or Statesman he stands undoubtedly above his predecessors. His place in history is very high indeed. It is next to Akbar, who as Dr. K.R. Qanungo has observed, “is justly entitled to a higher place in history than Sher Shah”.