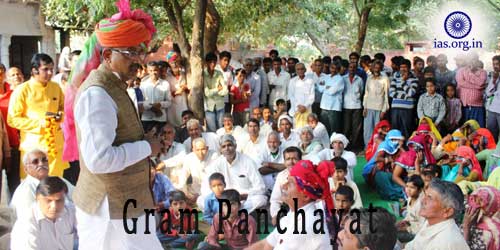 In order to assist Panchayat Raj Institutions in delivering Sustainable Development Goals the Government has proposed a new scheme, Rashtriya Gram Swaraj Abhiyan. Under this Abhiyan a major portion of the fund would be used for Panchayat Shasktikaran that is intended to train Panchayats representatives.

Announcing the scheme the Finance Minister had said, “A sum of Rs. 2.87 lakh crore will be given as grant-in-aid to Gram Panchayats and municipalities as per recommendations of the 14th Finance Commission”.

With this announcement ends the problem of scarcity of funds that has been cited as the biggest restraint for Panchayats in delivering their contemplated role as envisaged by our Constitution.

After the 73rd and 74th Amendment of the Constitution, the States were directed to form State Finance Commission (SFC) to arrange resources for the Rural Local Bodies (RLB) and Urban Local Bodies within a year 1994. Most of the states have already established four SFCs.

According to the recommendation of the 14th CFC (Central Finance Commission) , the entire amount of grant allotted to Rural Local Bodies will go to Gram Panchayats only as they are directly responsible for the delivery of the basic services to the people. Prior to this arrangement, only 75% of the CFC’s grant was being allotted was shared by State (5%), Zila Parisad (10%) and Block Samitis (10%). Now, in this new arrangement of distribution of funds, the State Governments have to take care of Zila Parisad and Block Samitis from their own funds, making it crystal clear that Gram Panchayats are now going to get 25% more. This new arrangement further establishes that the budget 2016-17 and 14th CFC have displayed an obvious tilt towards the Gram Panchayat as far as the matter of fund allocation is concerned.

Distribution of the Grant

On the basis of a simple revised formula the grant, announced in the Budget, would be distributed among States and Gram Panchayats. According to the 14th CFC the money would be distributed to States by according 90% weightage to 2011 population and 10% weightage to the area.It has been left to the States to either follow the same formula to assign money to Gram Panchayats or follow the formula provided by State Finance Commission before 15th March 2016.

After the formation of the CFC in 1994, almost all CFCs have now and then have come up with the issue of non-availability of reliable data; so with an intention to find a solution to this, somehow permanent, problem the 14th CFC has come up with the idea of providing 10 percent of total grant as ‘performance grant’.

However, to avail this ‘performance grant’ Gram Panchayats will have to fulfill certain conditions put forth by the 14th Finance Commission. These conditions are –

(i) Gram Panchayats would have to submit their annual audited accounts; and

(ii) they would have to make improvement in their own revenues.

One extra condition has been added particularly for the Urban Local Bodies under which they would have to publish benchmark of the basic service each year for public information.

The Factor in Release of Fund

As most of the Panchayats have, now and then, raised concern over delay in disbursement of funds from the States, the 14th CFC, with an intention to bring in and maintain efficiency in disbursal has directed that funds are to be released in two installments in the month of June and October during one financial year. The first installment includes 50% of the basic grant and the 2nd installment will include the remaining basic and performance grants.

Under the new arrangement of the CFC, it is the duty of the States to release grants to Panchayats within 15 days of fund being credited to their accounts by the Central Government. If a delay happens in the disbursement of the fund, the State concerned would have to disburse the amount with interest from its own resources. These distinct guidelines, most probably, are going to make sure the timely release of central grant in the definite months, enabling the Panchayats to plan and perform better.

Have a Look: The Panchayati Raj

Apart from the budget allotment, Panchayats, under the new arrangement, are permitted to levy property tax on buildings and vacant lands and collate tax on advertisements and entertainment activities such as cable television, internet cafes, boat ride etc. in order to meet the condition of ‘make improvement in their own revenues’. The Panchayats are also to collect non-tax revenue from ponds, orchards, minor mineral quarry, etc. in their area.

After the main problem of ‘Scarcity of funds’ were settled, cropped the next serious question related to the capacity of the Gram Panchayats in delivering the services efficiently by utilizing the funds in the best possible way.

There have been general complaints about. Sarpanches’ mis-utilization and non-prioritization of funds. This trend is the result of not only the tied funds but also of the lack of appropriate planning.

The role of Sarpanches, Gram Panchayat representatives, like that of MLA and MPs is advisory; however, in addition, they have to plan and execute themselves. So the first thing that is urgently required is their capacity building.

The Sarpanches should be trained to maintain the records of the funds received and their expenditure that would not difficult as now educated representatives are being elected in Panchayats.

Normally, and perhaps conventionally, for a block consisting of 100 villages there remains only one junior engineer. The Sarpanch has to constantly chase that engineer for the work. The junior engineer often takes months to pass the estimates and sometimes even seeks illicit payments. In the capacity building programme even the least educated Sarpanch should be trained to prepare the outline the commonly standardized works that Gram Panchayats undertake to avoid the dependency on one single junior engineer.

Utilization of funds by Panchayats

It is so, 14th CFC, in order to utilize the increased funds properly, has come up with the suggestion that Panchayat Ghar be designed as an all activity building consisting of general assembly hall for meeting of Gram Panchayat, SHGs (Self-Help Groups), farmers club, etc. It should also include separate rooms for Sarpanch, village library, bank, social gatherings, etc. within one frontier.