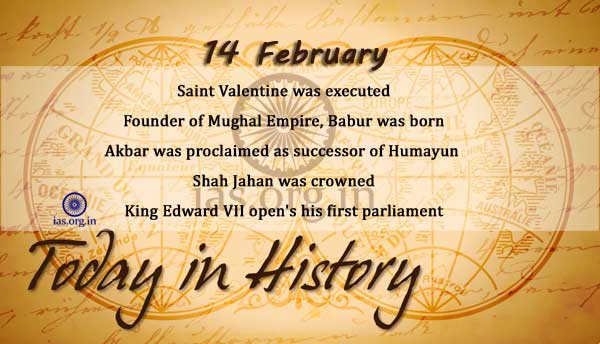 Saint Valentine was executed outside the Flaminian Gate in Rome on Claudius’ command. His command was that,  Valentinus either renounce his faith or he would be beaten with clubs, and beheaded.

Mughal Emperor Akbar was proclaimed as successor of Humayun at the age of tewelve years at Kalanur, Gurudaspur district, Punjab. Akbar (1542-1605), grandson of Babur, became third Mughal Emperor at the age of 13 years. He de-established Islam as state religion and declared himself impartial ruler of Hindus and Muslims. He also encouraged Art, Culture and Religious Tolerance.

Dara Sulaiman Shukoh was defeated in the struggle for Delhi throne Shuja’s in the battle of Bahadurpur near Varanasi.

Supreme Court orders Union Carbide Coporation of USA and Union Carbide India Limited to pay $470 millions (about Rs. 710 crores) in full and final settlement of all claims out of the Bhopal gas Disaster Litigation tragedy of 1985.