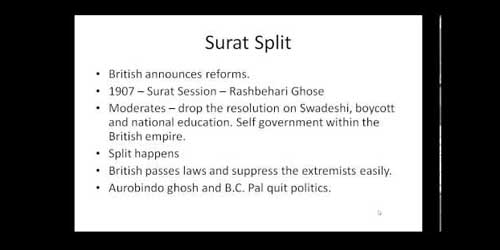 At the Surat Split 1907, congress leaders split into two groups – moderates and extremists. The Rift between these two sections became apparent at the Banaras Session (1905) when some nationalist-led by Tilak denounced the method of the moderates and suggested passive resistance. They also advocated the boycott of British goods and government institutions. At the end of this session, Lokmanya Tilak, and his followers held a separate conference and announced the formation of the Extremist Party. However, they decided to work as a part of the Indian National Congress.
In 1906, at Calcutta Session, the rift between Moderators and Extremists further widened. Both the groups put their candidates for presidentship but Dadabhai Naroji was accepted as a compromise candidate by both of groups. The Extremists group also succeeded in getting a resolution which emphasised the principle of swadeshi, boycott, and national education.

But Moderators did not accept what had happened at the Calcutta session in 1906 and were determined to undo the same at the Surat split 1907. Extremists were also equally determined to see that the Moderates were not able to have their way. In Surat, Extremists tried to push the candidature of Lala Lajpat Rai for President-ship of congress and Moderates Dr. Ras Behari Ghosh to be the President. The situation was saved by Lala Lajpat Rai and stepping down and Dr. Ras Behari Ghosh became the President. The real trouble started when the moderates tried to repudiate the resolution on the boycott, swadeshi, and national education which has been adopted in 1906. This was not acceptable to the extremists. As a result, open clashes took place and session was suspended thereafter Moderates held a separate convention from which the extremists were excluded this marked a complete split in the Congress.
The division was further cemented in 1908 when the Indian National Congress at the madras session made a change in its constitution. It provided that the Congress delegates were not to be elected only by the congress committee and associations affiliated to the Congress. The net result of this change was that the Extremists were excluded from the Congress. Tilak and his followers remained outside the Indian National Congress till 1915 when a compromise was arrived at.
The Surat Split 1907 was a turning point in the history of Nationalist Movement in India. It meant a victory of the Extremists over the Moderates it also marked a change in the policy and attitude of the Government towards the nationalist moderates to the government side. The Minto-Morley Reform of 1909 can be said to be the direct outcome of the Surat Split 1907. The split also greatly weaken both the parties. The Extremists were hounded by official repression and liberals were abandoned by their own people.