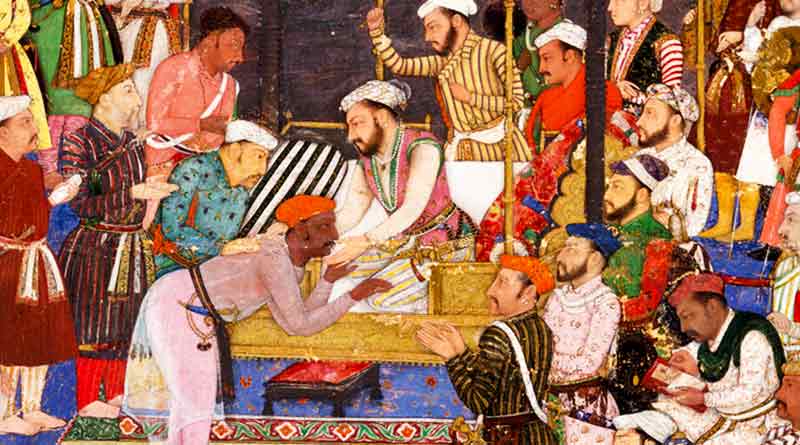 The first battle of Panipat was an event that marked the end of the Lodi dynasty and the beginning of the Mughal dynasty in India. The first battle of Panipat was fought between the last ruler of the Lodi dynasty, Ibrahim Lodi and the ruler of Kabul, Babur. The result of the battle of Panipat was an important milestone that changed the very face of the history of India.
Though Ibrahim Lodi had elephants and huge army but they failed to control them, Mughal army used guns and the war lasted for half day only. After the victory, Babur established an empire which lasted for next many years.

Great rulers of the Mughal Empire:

The first of the Great Mughals was Babur (“The Tiger”), who invaded and conquered India in 1526.  He was also a diarist, an enthusiastic hunter, and lover of gardens. He died in the Ram Bagh gardens in Agra, and his tomb lies in gardens bearing his name in Kabul, Afghanistan.

Born in Kabul, Humayun was the eldest of Babur’s sons and had helped his father with the conquest of India.   He ascended the throne at Agra on December 30, 1530, at the age of 23 but did not have the skills to manage the immature empire, Afghan warlords, Hindu Rajput princes and his own brothers.  He would have liked nothing better than to pursue his passions of mathematics and astronomy, but he had not been dealt that hand.

The greatest of the Mughal Emperors, Akbar, was born in exile and ascended the throne at the age of 13 after his father’s short restoration. Akbar was the Indian equivalent of Suleiman the Magnificent (1494 – 1520 – 1566).  He conquered massive new territories including much of Rajasthan, created a long-lasting civil and military administrative system, introduced standard weights and measures, tax structures and a workable police force.

Akbar was married to at least seven wives, one of them a Rajput Hindu princess from Jaipur.  He was enormously liberal for his time, promoting religious tolerance (and even his own hybrid Islamic / Hindu / Christian / Zoroastrian religion called Din – I-llahi), abolishing slavery and forbidding forced sati. Akbar died in Agra in 1605 and is buried in Sikandra.

Must Read: Cultural Achievements of Akbar

On 31 December 1600, England’s Queen Elizabeth I (1533 – 1558 – 1603 (70)) signed the Royal Charter which created the British East India Company. Originally a monopoly joint stock trading company, it grew to bring the administrator of the whole of India until, in the wake of the rebellion of 1857, India was made a Crown Colony and the assets of the Company were taken over by the British Government.

“Conqueror of the World”, Jahangir smoked opium and was into the grog, but was surprisingly effective at keeping things under control, and he found time to lay out a few gardens, including the one where he is buried at Shahdara in Lahore.

Jahangir let the newly arrived English in on a lot of good deals (for them), but he also had the good sense to have a woman of staggering beauty and intellect as his favourite wife (Nur Jahan – Light of the World), and to leave a lot of the empire running to her.  His tomb, in a 4 acre garden in Lahore, contains some beautiful decorative tiles and paintings.

Shah Jahan (“Ruler of the World”) inherited a near bankrupt empire from his father Jahangir.  He turned this around, in the process becoming the best remembered of the Mughal builders, largely because of the Taj Mahal.

Shah Jahan initially chose to rule, like his predecessors, from the Red Fort at Agra, and it was a few miles away from here that he built the Taj Mahal as a monument to his wife, known as Mumtaz Mahal (“Ornament of the Palace” or “Exalted of the Palace” depending on the translator), who died in 1631 after the birth of their 14th child. The construction of the Taj Mahal was begun in 1632 and it took 20,000 labourers 17 years to complete the job.

In 1638 Shah Jahan moved his capital to the Red Fort at Delhi, though it took a further 9 years for the palace complex there to be completed.  He ruled from here until he became very sick in 1658, precipitating a succession battle amongst his sons which was won by Aurangzeb his third son (who became first by killing his brothers).

Poor old Shah Jahan recovered, but too late to keep his throne, and he spent the last eight years of his life locked up in the Red Fort at Agra, only being able to glimpse the Taj Mahal in the distance through the river mists.  His tomb is there, however, unsymmetrically placed next to that of his wife – the great love of his life – because his own black marble Taj was never built!

Aurangzeb was an intolerant religious (Muslim) zealot and kill-joy.  He forbade music, put a stop to Mughal painting and left behind none of the architectural wonders that earlier members of his dynasty had produced.

The Hindus and Sikhs fared even worse, with suppression, destruction of temples, the reintroduction of a poll tax and public executions. Just a generally nasty little man as far as most of the population were concerned, and it is not surprising that his 50-year reign was the beginning of the end for the Mughal dynasty.

Impact of Religious Policy of Aurangzeb on Mughal Empire

The Revenue System under Mughal Administration