My account
Get into your account.
LoginRegister
Plans
Home Learn Culture The Rig Veda Age : Religion and Philosophy 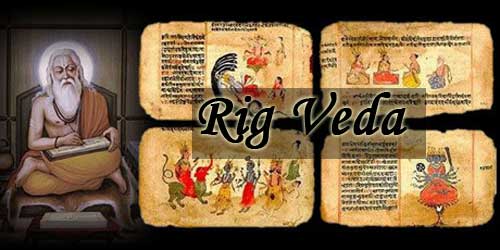 The socio-economic life, that project simplicity, of Vedic Aryans was quite opposite to the religious aspect, that was highly ritualized, of their life. Rig Veda, instead of presenting picture of primitive beliefs, suggests mature thought and understanding. One hymns, to refer eclecticism, suggests that ‘sages name variously that which is one’. This reflects the spirit of tolerance that has been the core of Indian religious thought throughout the ages.

The Chief gods the Rig Veda addresses to include Dayus, the sky, who is quite often coupled with Prithvi, the earth; the excellent sky-god, Varuna, whose supremacy was later challenged by the god of thunder – Indra; and the solar gods Surya and Savitri (Who represent the vigorous power of luminary).

Other gods are: Mitra, who is associated with Varuna; Pushan – represents the power of the sun that influences the growth of herbs and vegetation; and Vishnu, who is the personification of the swift morning sun. Rudra augurs his terrible aspect in later days as Siva. Asvins are the morning and evening stars; Maruts, attendants of Rudra, are storm-gods; Vayu and Vata are the wind gods and Parjanya is the god of rain. These gods were also invoked in the Rig Veda.

Apart from these gods, who are personified as human beings, of natural phenomenon, a few abstract deities such as Sraddha, “faith”, and Manyu, “wrath”, have been taken note of in hymns in the Last Book of Vedas.

The Vedic gods are braced together particulary Mitra and Varuna, who symbolize the union of heaven and earth. Also to this category belong the Martus, the Adityas and the Vasus in which the last ones are associated with, rather vaguely, Indra and Agni and do not possess any individual character. The ‘All-gods’ or the Visvedevas, are esteemed as a special group to be invoked with others, such as the Adityas and the Vasus.

Although one does not find any particular reference to animal worship in the Rig Veda in Vedic age, as a whole, sometimes the gods have been fancied as animals, for example Indra as a bull, and the sun as a swift horse.

Religious Practice during the Age of Rig Veda

The Vedic religion included worshiping gods in which, in order to get favours or boons from gods, sacrifices were performed. These sacrifices included offering milk, grain, ghee, flesh and soma. In the Rig Veda only Soma-Sacrifice has been elaborated.

With the ceremony of offering sacrifices were associated different classes of priests. These classes of priests consist of Hotri, who performs manual functions linked with worship; the Udgatri, who chants the Saman Verses.

Only king and his nobles could perform Soma-sacrifices since the were costly and elaborate. As the Rig Vedic religion was aristocratic in nature, it could not- fulfil the needs and aspirations of masses and therefore had a little popular appeal.

Philosophy in the Age of Rig Veda

In the tenth Book of the Rig Veda one can trace the beginning of the philosophy. In this Book the multiplicity of gods are questioned and the concept of ultimate unity of the universe is asserted by one God, who has been given various names such as Vishvakarman, Hiranyagarbha, Prajapati or Aditi. Moreover, stress has been laid on one Reality (ekam sat), who has been named variously. The concept of life after death was very well known in which Yama controlled the other world.

The later Vedic literature speaks of the growth of rituals and priesthood and the evolution of concepts of Maya (illusion), Karma (fate based on deeds), Transmigration, Mukti (release) and Atman (soul) or Brahma. The number of bare priests, which were seven in the Rig Veda, increased to seventeen.

A new spirit of spirituality and symbolism is observed in the growth of rituals. The duration of sacrifice (Yajna) is considerably increased lasting from twelve days to a year or years.

Philosophical Doctrines of the Vedic Age

The leading philosophical doctrines of Hinduism were promulgated in this age. The attainment of deliverance from earthly existence by the assimilation of the individual soul (Atman) in the world soul (Brahman) through correct knowledge is the main purpose of the teachings of the upnishads.

It is in the Satapatha Brahmana that the doctrine of transmigration  is first noted. It has been asserted that the retribution follows in the form of repeated births and deaths. It is elaborated in Upnishads that after ‘the path of the gods’ to those, who possess true knowledge that leads to their assimilation in the Brahma.