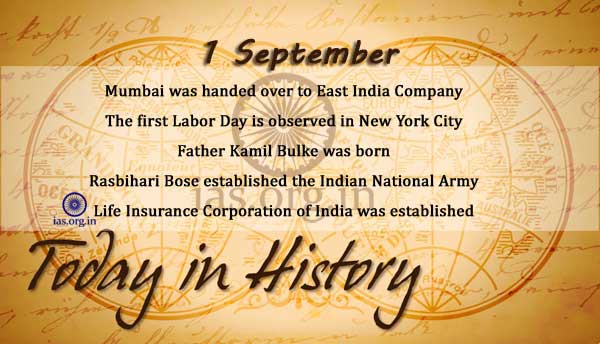 Mumbai was handed over to East India Company by King of England.

The Prussian army crushes the French at Sedan, the last battle of the Franco-Prussian War.

The first Labor Day is observed in New York City by the Carpenters and Joiners Union.

By an act of Congress, Labor Day is declared a national holiday.

Father Kamil Bulke was born. He produced a handy English to Hindi dictionary.

An earthquake levels the Japanese cities of Tokyo and Yokohama, killing 300,000.

Mahatma Gandhi undertakes a fast for unity among Hindus and Muslims. He breaks the fast after 73 hours when peace is restored.

Shivaji University was established in Kolhapur.

US spacecraft Pioneer 11 makes the first-ever flyby of Saturn.

Leaded petrol is banned in Delhi.

The Congress(I) President, Ms. Sonia Gandhi, launches a broadside against the Vajpayee Government on handling of Kargil issue.