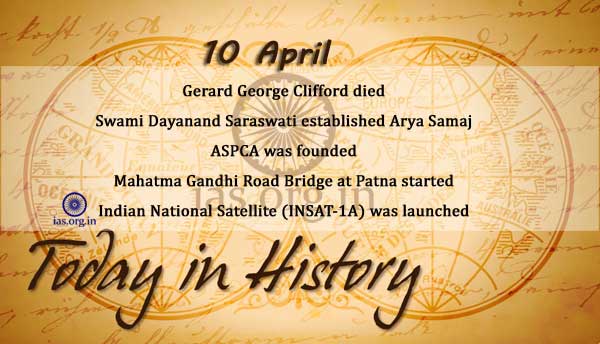 Gerard George Clifford, head of East-Indian Company, passed away at the age of 75.

Swami Dayanand Saraswati established the Arya Samaj at Bombay and in 1877 in Lahore.

The American Society for the Prevention of Cruelty to Animals (ASPCA) is founded in New York City by philanthropist and diplomat Henry Bergh, 54.

Police raid the headquarters of the Indian National Congress, Bombay.

India and Vietnam affirm the Panchsheel.

Morarji Ranchhodji Desai, first non-Congress Prime Minister of India (1977-79) and Chief Minister of Bombay, passed away at the age of 99. He was awarded with Bharat Ratna.

The marketing of Salman Rushdie’s novel ‘The Moor’s Last Sigh’ in India was cleared by the Central govt.

Announcement of UP’s 70th new district to be re-named after Jyotiba Phule.

Kerala becomes the first state to have public telephones in all its villages, accessible over STD/ISD from any part of the world.