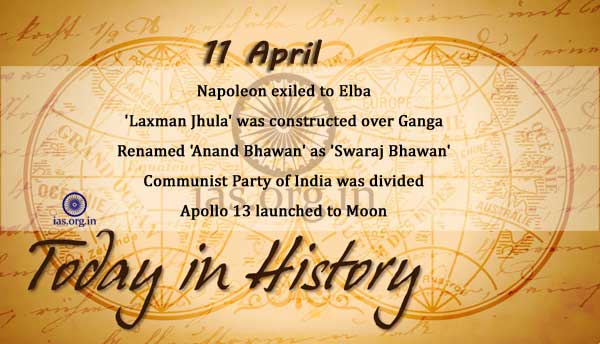 Mu’izzu’d-din Kaiqubad was killed in his bed. He was proved to be an inefficient ruler.

Napoleon Bonaparte, emperor of France and one of the greatest military leaders in history, abdicated the throne, and, as conditioned by  the Treaty of Fontainebleau, was banished to the Mediterranean island of Elba.

Iron ropes bridge known as ‘Laxman Jhula’ was constructed over Ganga at Hrishikesh .

Pandit Motilal Nehru renamed ‘Anand Bhuvan’ as ‘Swaraj Bhawan’ and handed it over to the people.

Treaty between France and India, transferring the former French settlement of Chandranagar to India, was ratified by the National Assembly, Paris. It was the last formal step in completing the process of sovereignty.

Apollo 13, the third lunar landing mission, was successfully launched from Cape Canaveral, Florida, carrying astronauts James A. Lovell, John L. Swigert, and Fred W. Haise. The spacecraft’s destination was the Fra Mauro highlands of the moon, where the astronauts were to explore the Imbrium Basin and conduct geological experiments.

The DRDO  successfully flight tested AGNI-11 with a range of 2000 km, using solid propellant rocket motors in both stages and rail mobile launcher system from its new launch complex in the Orissa Coast. With this launch the country has reached the point of operationalisation of AGNI-11 as a weapon system. (1-1-2000).

Ms. Jhumpa Lahiri, an author of Indian origin, won the Pulitzer Prize for fiction for her debut collection of short stories ‘Interpreter of Maladies’.