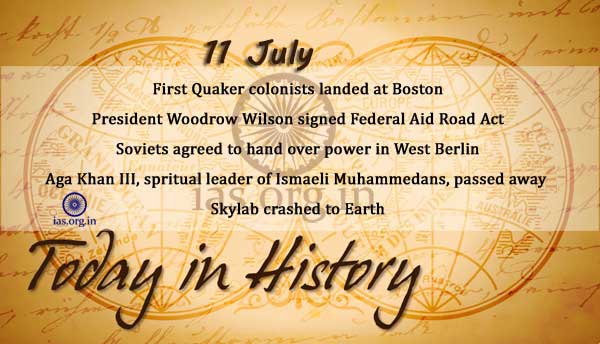 Ann Austin and Mary Fisher, two Englishwomen, became the first Quakers to immigrate to the American colonies when the ship carrying them lands at Boston in the Massachusetts Bay Colony. The pair came from Barbados, where Quakers had established a center for missionary work.

British Parliament finally rejected to remove the appeal of Hindus puritans against Sutee abolition, as demanded by tradional orthodox Indians.

On this day in 1916, in a ceremony at the White House, President Woodrow Wilson signed the Federal Aid Road Act. The law established a national policy of federal aid for highways.

Fulfilling agreements reached at various wartime conferences, the Soviet Union promised to hand power over to British and U.S. forces in West Berlin. Although the division of Berlin (and of Germany as a whole) into zones of occupation was seen as a temporary postwar expedient, the dividing lines quickly became permanent. The divided city of Berlin became a symbol for Cold War tensions.

Aga Sultan Sir Muhammad (1877-1957), Aga Khan III, spritual leader of Ismaeli Muhammedans, passed away. He worked for Britian in the World War I & II. Aga Khan was extremly rich, he once had himself weighed against a sack of diamonds belonging to him. He was also one among those who formed the Muslim League.

Parts of Skylab, America’s first space station, came crashing down on Australia and into the Indian Ocean five years after the last manned Skylab mission ended.

Two decades after the fall of Saigon, President Bill Clinton established full diplomatic relations with Vietnam, citing Vietnamese cooperation in accounting for the 2,238 Americans still listed as missing in the Vietnam War.

Indians bag a silver and a bronze at the International Physics Olympiad in Reykjavik.

Amrita Pritam, noted litterateur, honoured with the highest award for Punjabi literature for the century–“Shatabdi Samman.”