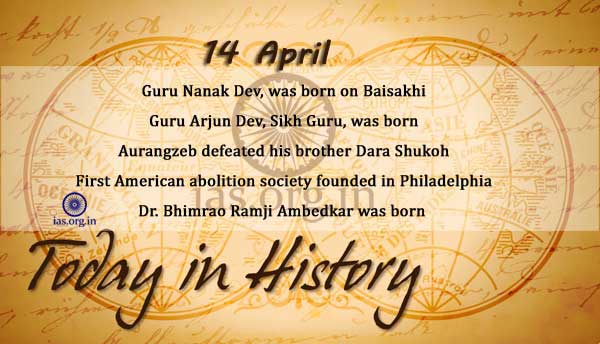 Guru Nanak Dev, originally known as Nankana Sahib, was born on Baisakhi in a Khatri family in Talwandi Rae Bhoe in Pakistan. Guru Nanak’s birthday has been traditionally celebrated on Katik Poornamashi. Althought the correct birth date has been established as Vaisakh 1 (April 14), it will continue to be celebrated on Katik Poornamashi until such time as it is changed to Vaisakh 1. (Most Sikhs in the present day consider themselves members of a separate religion).

Aurangzeb defeated his brother Dara Shukoh to capture the throne of Delhi.

Blast in ammunition loaded on 1,318 tonned freighter ‘S. S. Fort Stikine’ which was anchored in Victoria Dock at Bombay. The explosion killed 1376 people, wrecking 27 ships and destroying 40,000 tons of food.