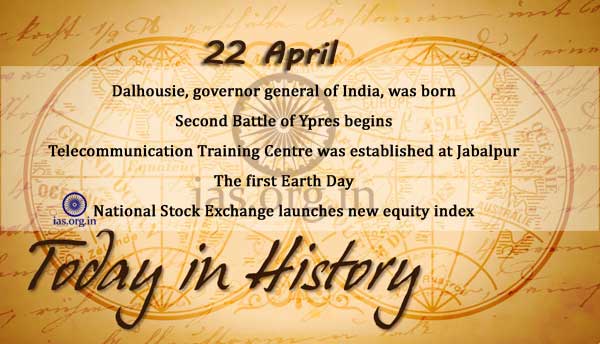 Revolutionary Surjya Sen’s many associates were killed and Surjya Sen “Masterda” himself went underground, on Jalalabad Hill and started extending his activities to neighbouring district

The Telecommunication Training Centre was established at Jabalpur.

Earth Day, an event to increase public awareness of the world’s environmental problems, was celebrated in the United States for the first time. Millions of Americans, including students from thousands of colleges and universities, participated in rallies, marches, and educational programs.

IAF in response to a recommendation by Secretary General, the Security Council adopted resolution No. 751 (1992) by which it established UNOSOM for handling situation which had deteriorated to an extent where death and destruction forced hundreds of thousands of civilians to flee their homes and causing need for emergency humanitarian assistance.

India and Bangladesh resolved to work together to ”root out terrorism”, push bilateral trade and harness river waters of the region.

Lok Sabha passes the 1999-2000 general budget through voice vote but without a debate and without amendments.