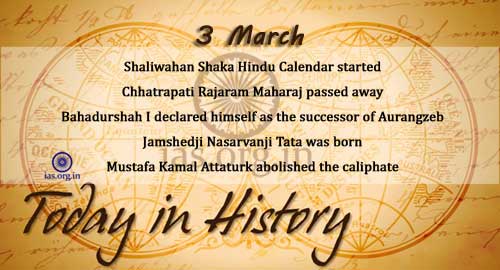 A battle was fought at Turkra or Turkra Qasba (in the Balasore district) in which the Afghans were routed.

Shehejade Muazzam declared himself as the successor of Aurangzeb and renamed himself Bahadurshah First.

Jamshedji Nasarvanji Tata, famous industrialist and father of modern technology, was born at Navsari near Surat, Gujarat. He started cotton mills in Bombay and Nagpur and founded the Tata Iron and Steel Company, which is one of the largest integrated steel mills in the world.

A length of 119 miles of line was laid in the North from Allahabad to Kanpur.

Mustafa Kamal Attaturk abolished the caliphate and established a nationalist government and thus Khilafat Movement ended without achieving its aim.

Gandhiji commences “”fast unto death”” at Rajkot to protest state’s autocratic rule at Bombay and to secure ruler’s adherence of promise given towards reform administration, and ends it on March 7 on Viceroy’s intervention.