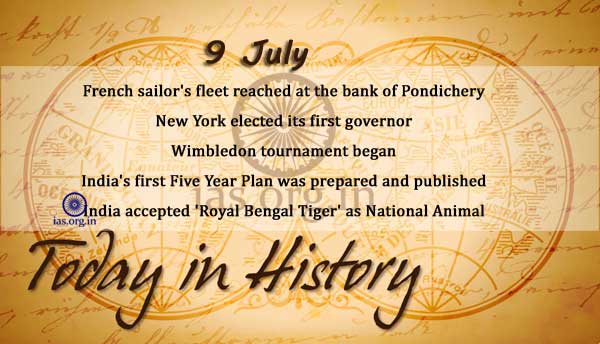 French sailor’s fleet reached at the bank of Pondichery in India.

On this day in 1777, New York elected Brigadier General George Clinton as the first governor of the independent state of New York. Clinton became New York’s longest-serving governor, as well as the longest-serving governor in the United States, holding the post until 1795, and again from 1801 to 1804. In 1805, he was elected vice president of the United States, a position he held under Presidents Thomas Jefferson and James Madison, until his death in 1812.

Zachary Taylor, the 12th president of the United States, died suddenly from an attack of cholera morbus. He was succeeded by Millard Fillmore.

The Bombay Stock Exchange, the first in India, was constructed under the shade of a large banyan tree.

On July 9, 1877, the All England Croquet and Lawn Tennis Club began its first lawn tennis tournament at Wimbledon, then an outer-suburb of London. Twenty-one amateurs showed up to compete in the Gentlemen’s Singles tournament, the only event at the first Wimbledon. The winner was to take home a 25-guinea trophy.

In a ceremony held at the Pentagon in Arlington, Virginia, General Dwight D. Eisenhower appointed Florence Blanchfield to be a lieutenant colonel in the U.S. Army, making her the first woman in U.S. history to hold permanent military rank.

India’s first Five Year Plan was prepared and published. There was the first amendment to the Constitution and the first general elections were held.

India accepted ‘Royal Bengal Tiger’ as its National Animal, as recommended by the Indian Wild life Board. This Tiger is also known as the majestic tiger – panthere tigris (Linnaeus).

The government agreed to set up a Joint Parliamentary Committee to enquire into the security scam.